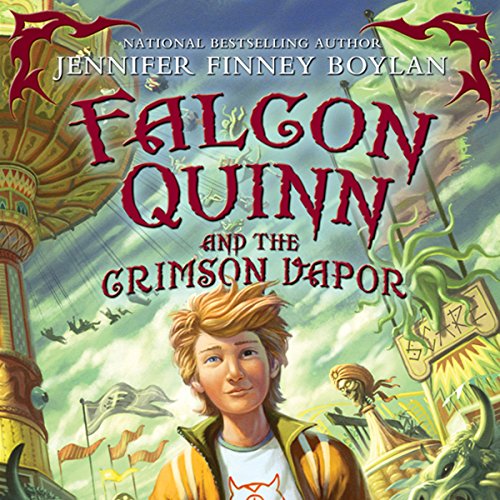 Falcon Quinn and the Crimson Vapor

Falcon Quinn survived the first term at the Academy for Monsters along with his monstrous friends Max, Pearl, Mortia, and the rest. He has finally discovered his monster nature and is working hard to embrace it. But what does it mean to be an Angel, exactly? Having wings is great, when Falcon can remember to use them, but with parents who are the leaders of two warring groups- the monsters and the guardians - Falcon still feels torn in half.

When his monster friends begin to doubt his loyalty to the monster world and his only option is flight to Guardian Island, where his mother rules and he is a prince, he'll see the guardians as well as his monster friends in a whole new light. He will also have to decide if Jonny Frankenstein can be trusted and find a way to save his friend Megan from her imprisonment on Guardian Island, not to mention find a way to stop the monsters and guardians from fighting, once and for all.

Best-selling author Jennifer Finney Boylan continues the heroic and often hilarious tale of Falcon Quinn and his band of monster friends in this second installment of the hair-raising and sidesplitting adventure of monstrous proportions.

What listeners say about Falcon Quinn and the Crimson Vapor

Life is not easy for Falcon Quinn, but he manages to make it through another predicament.The narrator did a good job.

Sometimes I felt like I was listening to sesame street during a cast panic attack and mass evacuation. Berman probably had fun doing the voices. But manic behaviour does not a story make.

This is a truly amazing book,it has all of the things a good book needs,mystery,friendships, humor,and most of all it shows you to be who you ARE.