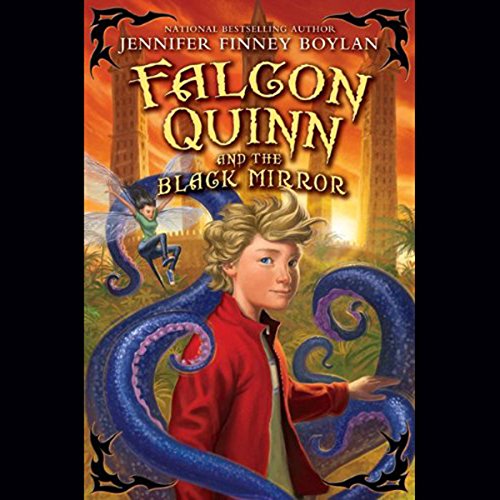 Falcon Quinn and the Black Mirror

Falcon Quinn and the Black Mirror

Falcon Quinn and the Black Mirror is the story of a boy named Falcon Quinn who boards the school bus one day as usual, only instead of taking him to school, the bus takes him to The Academy of Monsters, where children go to learn how to suppress their monstrous natures so as to better pass themselves off in human society. At first Falcon thinks it’s all some big mistake, but soon enough he learns that it’s no mistake — he actually is a monster himself. Upon arrival, he and his classmates are given a test to determine what kind of monsters they are — Frankensteins, Sasquatches, elementals, chupacabras...you name it. But unlike all of his classmates at the Academy, no one knows what kind of monster Falcon is.

For readers, it’s that central mystery that drives the plot of Falcon Quinn and the Black Mirror, but for listeners it’ll be Fred Berman’s enthusiastic and highly entertaining performance. Berman is one of those vocal chameleons who is able to provide distinct and wildly different voices for each of the characters he portrays. Here he showcases a dynamic range, from surfer-dude brogue to growly Franken-speak to the somewhat-hyper Latina chupacabra — and all work wonderfully in bringing the narrative to life. The overall effect is something like listening to an animated film or cartoon’s voice over, which makes it all the more amazing that it’s all done by one person. Older listeners may feel that in some of the more bombastic passages Berman goes a bit overboard, but the target middle-grade audience should love the performance from start to finish.

The book itself, while a bit derivative, and at times heavy-handed with its message, is an enjoyable romp, sure to please fans of the Harry Potter series looking for something in the same vein. It’s quite fun, perhaps overly silly at times, but the story is one that most young people should be able to relate to, given its broad theme of social isolation. And in the end it’s just a rollicking good adventure story that listeners of all ages should be able to enjoy. —John Joseph Adams

Thirteen-year-old Falcon Quinn and his neighbors, Max and Megan, board bus number 13 for school on an ordinary day in Cold River, Maine. Only the bus doesn't take its ordinary route, and Falcon and his friends soon find themselves in an extraordinary place on Shadow Island, at the Academy for Monsters. With a student body stranger than the cast of any monster movie Falcon has ever seen, the academy is home to creatures and oddities of all kinds. In the academy's atmosphere, Falcon's friends begin to unleash and enjoy their monster natures, from flying with Pearl, La Chupakabra, to decaying with the "Zombie Snap." Falcon has always felt different, with his one bright blue eye and one shadow-black eye, but is he really a monster? Will he discover the other thing that makes him different when he finds himself in the Black Mirror? And when he learns that the school's mission is to teach students to hide their aberrant natures, Falcon and his friends need to find a way to fight back for their monster selves. Bestselling author Jennifer Finney Boylan introduces Falcon, Max, Megan, and their band of monster friends in this first installment of a hair-raising and sidesplitting adventure of monstrous proportions.

I was so very impressed with the narrator of this book that I am moved to write only my second review in four years of membership. The story, itself, was above average and suprisingly witty. However, in my opinion the near-perfect narration raised this listening experience to a higher level than it might have been otherwise. I say "near-perfect" only because perfection is impossible - for me, the few flaws in the reading were not worthy of critique. I was amazed at Mr. Berman's range of voices and his understanding of the author's intentions and humor. Bravo!

We loved this book. The reader is excellent--very impressive characterizations for each character. It is very fun and funny. It also deals with issues of identity. We can't wait until the second book comes out on May 11th, 2011!

Would you listen to Falcon Quinn and the Black Mirror again? Why?

I have listened to this story 12 times now. I just love it. The narrator does a fantastic job bringing the characters to life.

Mr. Shale (not sure on the spelling as I listened and did not read) Anyone who is an adult like myself will understand why Mr. Shale is my Hero (LoL)

What does Fred Berman bring to the story that you wouldn’t experience if you just read the book?

Oh the narration brings the book to life. I love his take on the characters.

so well done. loved it.

even though this is a kids book it will leave you on the seat of your pants. going for the next book now.

This is fun story about monsters that are like regular teenagers. If you liked Harry Potter, you'll like Falcon Quinn.

My daughter loved this book so I thought I would listen for a chapter or so but I got hooked! Fun characters, lots of action, a genuine theme and unexpected twists. The narrator made it extra fun with such a variety of voices.