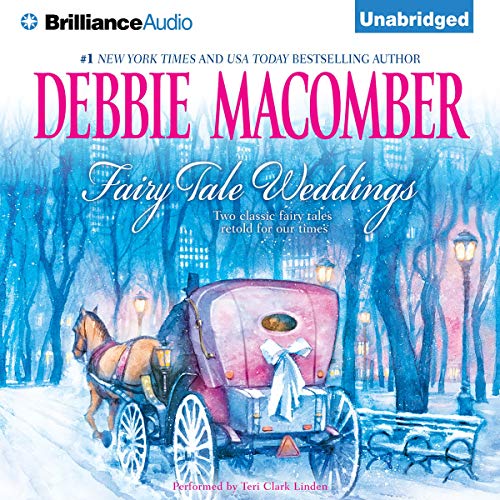 By: Debbie Macomber
Narrated by: Teri Clark Linden
Try for £0.00

Cindy and the Prince

Thorndike Prince - handsome, levelheaded, successful - is a high-ranking New York City executive. Cindy Territo is the janitor who cleans his office after hours. There's no reason they'd ever meet, no reason he'd even notice her - until, on a whim and a dare, Cindy crashes his company's Christmas ball. She dances with her Prince and then, like a proper Cinderella, flees at midnight, leaving her heart behind....

Some Kind of Wonderful

Beautiful inside and out, New York socialite Judy Lovin values family over fortune and fame. So when her father's business collapses and his most powerful enemy offers to help - in exchange for Judy's company - she agrees to join John McFarland on his remote Caribbean island. It isn't long before she discovers that John's far from the beast he seems to be!

Great retelling of my favourite story Cinderella and Beauty and the Beast.

Between Debbie and Teri, they gave the girls a new lease of life.

the book consists of two stories, cindy and the prince and some kind of wonderful.
cindy and the prince is a retelling of Cinderella. for me it was too long and everyone knows the ending.
some kind of wonderful, a retelling of beauty and the beast, was for me the better of the two stories.
I have to agree with previous reviews, the narrator spoiled the book. her performance of male voices was terrible and the main female voices weren't much better sounding more girlish than the 26 years old they were meant to be.
a different narrator would have made a big difference to my star rating.

I am sure that Teri Clark Linden is a nice person, but... I could barely tolerate her voice as a narrator. In fact I could not complete listening to the presentation as her performance started to grate on my poor nerves. Teri used a Laura Petrie/Giselle (Mary Tyler Moore/ Amy Adams) voice- high, too innocent, annoying after a length of time for the women and when portraying a man... ug. It was straining. When she was simply reading descriptions it was all right enough, but when the voices started her portrayal was distracting from the storyline.

The audiobook includes two stories a Cinderella one and a Beauty and the Beast type story. The stories themselves are pleasant enough. Cindy and the Prince was sweet, easy to follow and predict. Classic Cinderella story with a modern re-telling. It was fun to clean and dust while listening. I didn't finish Some Kind of Wonderful because the performance killed the story for me. The male performance voice were just... bad.

Overall nice, but I would read it not listen to it if I had to do it again.

Not What I Was Looking For

I love fairy tales, and I love romance, but these stories were too much like a paperback romance novel. Teri Clark Linden did a great job reading the female voices. I loved her voice. But the males were not very well read.

Fairy tales are always entertaining and this version was very enjoyable to spend a few moments of your day.

This is a great feel good book to listen to. It has all the good endings you could want.

This lady sucked at narrating! I love this book but I couldn’t get through it because of her.

Not in keeping with my DM reading experiences

Would you try another book from Debbie Macomber and/or Teri Clark Linden?

I will always keep trying another Debbie Macomber book. I've had a few disappointment... but overall, she transports me o a gentler place with good friends... much needed in my sometimes stressful life. Teri Clark Linden as a narrator, on the other hand is probably not something I would do again. She kept me from getting into an already hard to enjoy book. Her male voices sounded like they had horrid accents and snot filled noses.

What was most disappointing about Debbie Macomber’s story?

Both stories were so totally unbelievable. I have to "bite" to get into a book. Who falls in love and plans forever just like that? I need to be able to see myself or my friends in the books. I had hoped after hanging in with the first story, the 2nd one might be the saving grace. Not even close. Even worse. BUT, this being said, I have listened to so many DM books and have loved all but two. Those are pretty good odds. I will keep working my way down he list.

What didn’t you like about Teri Clark Linden’s performance?

She does not change characters very well. It was like stopped up munchkins speaking much of the time. No quality expression in her voice.

I know I have read a couple of disappointing books by DM recently, but have listened to so many feel good, sweet ones... I'm sure the next one will be a pleasure.

One of the worst narrators ever!!!!

Found it very difficult to listen this. The narrator is so bad that it actually takes away from the story(ies) -

Would you consider the audio edition of Fairy Tale Weddings to be better than the print version?

I wouldn't say that the audio edition is better than the print version, it just different. I find that sometimes I like to read for myself and at other times I love to kick back and listen to someone read to me. All in all this book is a really good book. I would recommend it.....

I don't really have a favorite character

What about Teri Clark Linden’s performance did you like?

Enjoyed the stories and found the relationships relating to actual fairy tales fun. I really like Debbie Macomber, she makes things very believable.