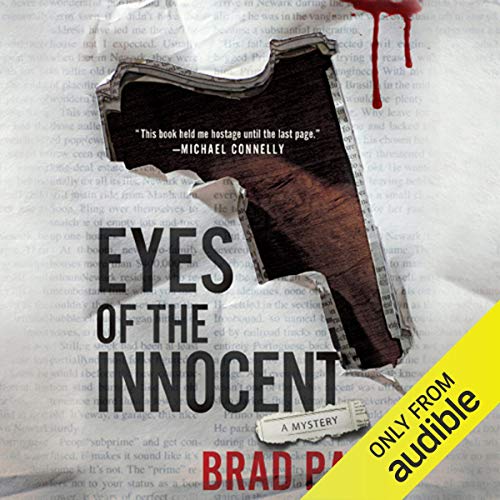 Eyes of the Innocent

Eyes of the Innocent

Investigative journalist Carter Ross is always in search of a story that isn’t BBI (boring but important), and the death of two young brothers in a suspicious house fire in Newark, NJ turns out to be anything but boring. Single-mother Akilah Harris’ anguish over the loss of her boys is genuine, but everything else about her story quickly unravels as Ross and his intrepid team of colleagues at the Eagle-Examiner discover that the fire is connected to the sensational disappearance and murder of city councilman Wendell “Windy” Byers, Jr. Brad Parks, a former Washington Post reporter, uses the recent economic downturn, mortgage scams, and decline of print journalism as a backdrop to this modern mystery.

Narrator Macleod Andrews is the Rich Little of voices, and with a large cast of characters and rapid-fire dialogue to interpret, his vocal skills get a full workout. Andrews’ reading of Carter Ross is both conversational and a tad condescending, which perfectly fits the veteran, street-smart reporter. But where Andrews really flies is interpreting the secondary characters, including the newspaper’s gruff, vowel-challenged editor, the various urban dialects of the African-American characters, and gay intern Tommy Hernandez, who, at first, sounds a little too much like Hank Azaria’s Agodar in The Birdcage before Andrews reins him in to create a savvy character who adds levity to the twisty, violent story.

Andrews also impressively excels with the various female characters, especially Ross’ sidekick, Lauren “Sweet Thang” McMillan. The way Andrews raises his voice an octave to deliver Sweet Thang’s spacey monologues is worth the price of admission alone. While Sweet Thang might come across as an airhead, her ability to interact and empathize with everyone from thugs to grieving widows helps find the clues linking Akilah to Windy Byers, proving there’s a true reporter behind the non-sequiturs. Andrews’ singular voice contains multitudes and his take on Parks’ entertaining thriller will have you intrigued, laughing, and on the edge of your seat to the very end. —Collin Kelley

Carter Ross, the sometimes-dashing investigative reporter for the Newark Eagle-Examiner, is back, and reporting on the latest tragedy to befall Newark, New Jersey: a fast-moving house fire that kills two boys. With the help of the papers newest intern, a bubbly blonde known as Sweet Thang, Carter finds the victim's mother, Akilah Harris, who spins a tale of woe about a mortgage rate reset that forced her to work two jobs and leave her young boys without child care.

Carter turns in a front-page feature, but soon discovers Akilah isnt what she seems. And neither is the fire. When Newark councilman Windy Byers is reported missing, it launches Carter into the sordid world of urban house-flipping and Jersey-style political corruption.

With his usual mix of humor, compassion, and street smarts, Carter is soon calling on some of his friends - gay Cuban sidekick Tommy Hernandez, T-shirt-selling buddy Tee Jamison, and on-and-off girlfriend Tina Thompson - for help in tracking down the shadowy figure behind it all.

Brad Parks' debut, Faces of the Gone, won the Shamus Award and Nero Award for Best American Mystery. It was heralded as an engaging mix of Harlan Coben and Janet Evanovich. Now Parks solidifies his place as one of the brightest new talents in crime fiction with this authentic, entertaining thriller.

"This book held me hostage until the last page." (Michael Connelly)
"Carter Ross is not only a first-rate investigative reporter; he’s also a first-rate comic. It’s a rare mystery that provides a good laugh on almost every page. One can only hope that Brad Parks has more mysteries for Carter Ross to solve in future books." (The Star-Ledger, Newark)

Carter Ross is on the hunt for another news story and in this investigation he is helped by a trainee who would seem at first to be more gifted for emotional outpouring with potential victims of a shark house dealer than for 'serious' reporting. Carter maintains his self deprecatory stance and maintains his ironic vision which is highly amusing. There are some memorable scenes when his black friend from the Hood calls upon the services of his formidable wife to recuperate a bracelet from a pawn shop owner or when his intern makes friends with the mother of a victim in the story. If you want something relaxing, amusing and enjoyable to read, look no further.

When two young boys are left alone in a house and that house burns down who is to blame? Is it the mother's fault for leaving her boys alone in the house while taking a second job so she could pay her mortgage? Or the mortgage company for inflating the interest on her payments? Or did the married man she was having an affair with torch the house? Or was it something more nefarious?
This was a very well written book. I have only listened to one other book by Brad Parks before and that was a stand alone (Say Nothing) which was easily a 5 star book. I've been meaning to get his other books ever since.
So this is my first book on his Carter Ross (investigative journalist) series but it will not be my last. I will be purchasing all the books in this series.
MacLeod Andrews does a fantastic job narrating.
If you found this review helpful please indicate so.
Thank You.

Great Story, Sweet Thang made it a treat.

What did you love best about Eyes of the Innocent?

Strangely the historic aspect about Newark I didn't know about, some of his side descriptions sent me on a research marathon.

What was one of the most memorable moments of Eyes of the Innocent?

Sweet Thang being so naive about Akilah.

I love Carter Ross series of books! Brad Parks did a wonderful job with a mixture of humor and mystery but not in an unbelievable way! Also Macleod Andrews...a wonderful pick! I listened to my first book from the library now I want to download all!

Carter Ross is an investigative reporter working for the New York Eagle-Examiner in Newark, New Jersey. In Eyes of the Innocent, Book 2 in the Carter Ross series, Ross is assigned a story of two young brothers killed in a Newark house fire. Intern Lauren McMillian, the beautiful 22 year old daughter of a wealthy friend of the publisher of the Eagle-Examiner, is assigned to help with his investigation. Employees at the newspaper had given Lauren the nickname "sweet thing" behind her back but she is well aware of it and is not offended. Lauren is eager to please and is effective at using her feminine wiles as well as her computer skills to get information.

Eyes of the innocent is a superb and intelligent suspense murder mystery/thriller. Author Brad Parks' Carter Ross series reminds me of the journalist Jack Gannon series by Rick Mofina; and it is as good as the Gannon series. The real star of this audio novel is narrator MacLeod Andrews who does a fantastic job with the voices and accents.

So often a sequel will not be as good as the first. But in this case, book two of Carter Ross matches and even excels the first.
The Audible editors' review says it all about MacLeod Andrews and his brilliant, tour de force narration. He absolutely defines all the characters and his voice makes all of them come alive.
I loved all the literary and cinematic references done with such wonderful ironic humor from Brad Parks' wonderful writing.
If the rest of this series is as good as this one, I'm thrilled to be totally hooked on Carter Ross and MacLeod.

A huge collection of unimaginative clichés

I tried to hang in with this book as long as I could but had to finally give up on it. Yet another book heavily focused on “the hood.” Totally lacking in creativity and imagination.

I'm liking more and more how this Mr. Parks fellow intertwines the bad guy story into the story Carter researches for his news worthy addition to the newspaper. Very creative with an abundance of entertainment.

And oh my God Sweet Thang! I thought I would hate having her in the story because there is nothing worse than not being attractive to females but have to listen to how hot, perfect, blah, blah, blah some chic is. Though Carter's character was attracted to her, it was hilarious how he portrayed her and her personality although border annoying really added so much fun to this dark tale. Very good writing in this story.

LOL. Mr. Andrews has such a man's voice, (an extremely lovely man's voice) that his female voices come out too...I don't know, not girly. But he still did a great job as the bubbly blonde Lol. I'm so bummed the last 2 books aren't narrated by him so I'll end up passing on those two.

Anyway, so far, a great series and MacLeod Andrews is the perfect voice for Carter Ross.

I have some reservations about this book, but overall I would recommend it. I've read literally thousands of mysteries, and I'm darned hard to please, so a 4 star from me means something! On the other hand, the reader is not very good. He is boring, which is bad enough, but also does those phony baloney voices.

Fun journalistic mystery. The narrator is fine as the journalist and other men in the story but he makes the women (especially the female protagonist) sound like a ditz. Voices of females too high and scratchy- really irritating-changes the tone of the story and made it hard to listen to. Except for voices, the story would have earned 3 stars. Sorry.

I had high expectations for this book based on the high ratings it received from 4 reviewers. I was very disappointed. The narration was fine. The story was simplistic and largely unbelievable in several parts. I recommend you take a pass on this one.