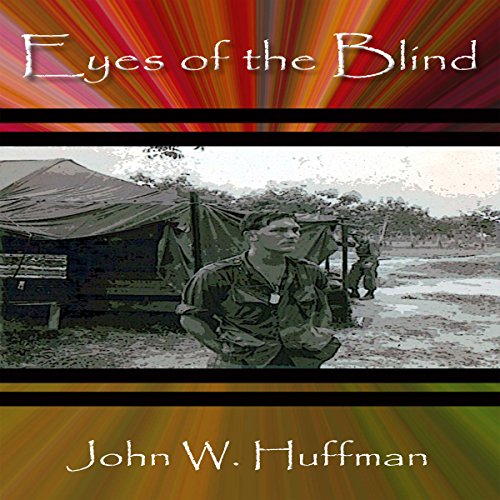 Eyes of the Blind, the second in the John Joseph Sharpe trilogy series following America's diplomats and leading into Above All, is a forceful saga set in the Vietnam conflict's initial phase, as support for the war effort wanes amid the media coverage's most exploitive stage.

Following his second battle wound in Operation Attleboro, young Private Delarosa earns his way out of combat. But he becomes entangled in his best friend Jay Sharpe's driving desire to remain in the infantry and signs a waiver to remain on the line. Together the two rapidly rise in rank while enduring a downward spiral in morals as political agendas replace aggressive military tactics, chronicling the best and worst of that difficult era.

I really enjoyed listening to this book. I love good war stories anyway, but most of the time, I read non-fiction accounts of war. This fictional account was loaded with military jargon and assumes the reader will know what many of the terms and words used mean. I almost feel as though only those with prior service or a good knowledge of the military will really be able to fully enjoy this book without going to look up words on a regular basis.

To me, this book shows just how horrendous war can be and the toll it can take on service members who are unfortunate enough to go through it. I love how this book touches on several ideas surrounding the Vietnam War. Civilian casualties, Cambodia, the media's portrayal of the war, internal strife among the soldiers, the brotherhood that evolves through war, the need for soldiers to stay even when they have the chance to leave just to take care of their men, rapid promotions and more. Even though this is a work of fiction, it really hits on a lot of truths, and shows how these events affected those involved.

The narration was great. Rich did an outstanding job. It made the book that much more enjoyable.

I feel for all of the unsung heroes who participated in the Vietnam War, both those drafted, and the volunteers.

Great look into a soldiers story!

Would you consider the audio edition of Eyes of the Blind to be better than the print version?

I'm not sure since I have not read the book only have listened to the audiobook.

The internal conflict that rages in soldiers between right, wrong and having your brothers backs.

He kept it simple and the characters voices straight.

Who was the most memorable character of Eyes of the Blind and why?

Jay was most memorable because of his unending quest for redemption.

This audiobook was provided by the author, narrator, or publisher at no cost in exchange for an unbiased review courtesy of Audiobook Blast