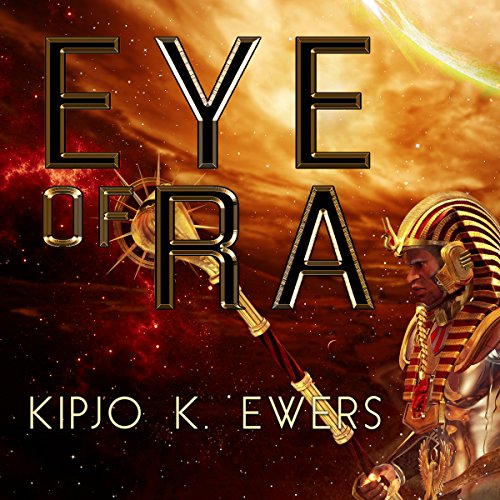 Laurence Danjuma was a young man on the straight and narrow, with hopes and dreams of making a better life for himself and the father who raised him. Fate and circumstance had a different idea in mind, breaking not just his body but his will.

Now, as he's on the brink of death, an ancient power within his family's legacy awakens to both save his life and place him on the path to his destiny.

As Laurence unlocks secrets about his true bloodline, he will stumble upon a dark one that will put not only his life on the line again but also the lives of the entire human race.

Will Laurence find the strength to take up the mantle handed down to him in order to stand against the looming threat that could bring about the extinction of every single human on the planet Earth?

Can he be the hero he never expected to be?

What listeners say about Eye of Ra

Truly as good as the first two in the series. I laughed, cried and got completely absorbed into a world that is unfortunately not my own.

Started off kind of nervous thinking "there's no way this could be anywhere as good as the first two books. What was Kipjo thinking trying to tell me stories about a different character in the EVO universe?" But the story turned out amazing! It's been many months since I listened to an audiobook this gripping. Character development, narration, and vivid details of the character's adventures were on point. I really look forward to the next book in the series.

I love this book. I hope there's more to come from the series. everybody should go out and get this book either in print form or audiobook.

Very entertaining story and characters, I am looking forward to the next in the series.

Awesome back story, great character building, looking forward to the next installment of this series.

This book was flawlessly written! I love Lawrence's fall from grace, his struggles to becone a better man. And upon his redemption , he found a home, true happiness, and a purpose. It is very spiritual. I loved it!!!

Good story, but I could have listen for a few more hours. It is worth the listen!

Difficult to listen too

Technical/production problems made the book difficult to listen too, great addition to the First world and the narrator did well, BUT the audio seemed to fade in / out, some of the narration would drop in volume as to be unheard, especially in my vehicle (which is where i listen to 90% of the books i buy).

I had no idea I would enjoy these type of books, but I am glad I took a listen.

LOVE THIS SERIES! BEST SUPER HEROES EVER! WE NEED MOVIES OF ALL EWERS BOOKS!! EXPERTLY READ AND FASCINATING! A MUST READ FOR ALL WHO LOVE SUPERHEROES ESP THOSE WHO LOVE REALISTIC AND AMAZING BACK STORIES. WORTH THE CREDITS!!