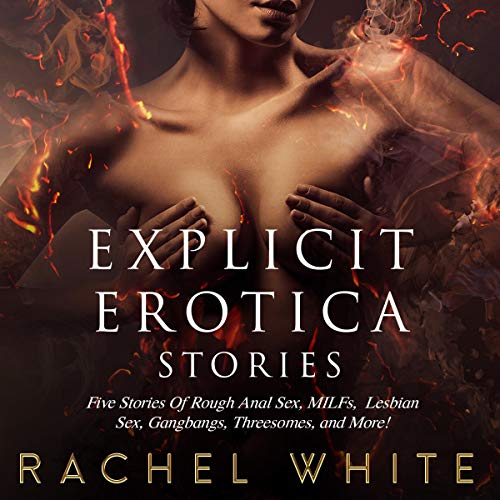 By: Rachel White
Narrated by: Hartley Good
Try for £0.00

The story begins with Cassie, who has brought home a man that she had managed to seduce to her apartment for a night of hopefully good sex with a handsome stranger. After being disappointed a number of times before, her hopes are high when he shows that he is actually quite good as starting off foreplay. However, they were dashed quickly when he ended things too quickly without her unsatisfied. Thus, after he asked if he could spend the night, she kicks him out of her apartment.

The next day, while having breakfast with her best friend Yasmin, Cassie tells her the details of the previous night. Once she calms down, she tells Cassie about a resort where they host a “special program”. Cassie agrees and tells Yasmin to make the reservation.

At the end of the week, Cassie arrives at the Angel’s Paradise resort. After settling in and a phone call to her friend who tells her that the weekend was supposed to be a weekend of Kama Sutra education, leaving her both shocked and excited, she goes down to the yoga studio where she meets and embarrasses herself in front of the handsome and charming Darius, who leaves her nothing short of flustered, by ripping her leggings.

After their encounter in the studio, she chooses to relax at the spa for the day to recover for their next meeting. The next morning, Cassie decides to call Yasmin to ask her for the real story behind Darius. Yasmin admits that she had set up everything and that it was just so that her friend could relax for a bit.

Knowing this, she knows what she wants to do and heads down to the studio where she takes her chance to take the handsome instructor for herself as soon as his class is over. The two decide to christen the attached storage room of the studio thoroughly, leaving the two looking forward to the rest of her time at the resort.

Not an interesting story in there, and the narrators voice is so monotone that I couldn't finish listening to any story.

God forbid if I had paid for this download rather than having it as a credit then I would be demanding my money back !!!!

Each of the mini story is packed full of romance, love, steamy sex. These are all very good stories. it will be a wonderful stories to keep you warm on these cold nights. Good job.

Description wasn’t what it said

Do not want to hear gay stories.
Description did not express gay stories. I’m Disappointed.

I love the story lines of each stories that lead to unbelievable encounters its romanticism times 10. This collection of stories has every kind of sex that you can imagine from mild to wild. Has a little bit of almost everything.

This audiobook is amazing! This is one steamy audio book. With lots of hot action. This is a great collection of short hot sexy stories! These stories are filled with hot MFM, MFMM stories!

This was the most scrumptiously naughty group of stories! Some involve capture, all involve delicious sexy events. So steamy and hot. Highly recommend this book if you like HOT stories of imperfect people

Gives ideas how to have steamy sex!

This book is really hot and sexy. If you are having trouble with your sex life, this might be the answer. The stories will definitely help you to get an idea of how to have steamy sex. All your fantasies will satisfy you. Highly recommended to everyone!

This audio will not disappoint anyone. The narrators are really awesome. The narrators for this book is by far the best I've heard. I love it! The book was good and unique. I was really excited to get the audiobook of it as well. I love these stories.

Full of emotions and wildness!

I loved the stories. I truly enjoyed each story. They had a good storyline, build up and the best kind of sex!! yummy! I recommend this to all have different fantasies in S-E-X! I love how the author gave different scenarios in which one would have sexual intercourse with another. The emotion is there, the sex is there..wild sessions :)

Got more fun and real taste of sex tape

In this book quickly clarified diverse methods for sex and if these ways utilized then you can get more fun and taste of sex. This book helps me to understand that submission is ok. This audiobook does an excellent job of holding the listener's attention. This book is very well written and easy.

This book gives you more ideas to explore the beauty and passion of sex. If you are looking for the submissive lifestyle, this book you will show you and begin to try new things.The narration provided was excellent. The narrators had a pleasing voice, and they made it enjoyable to listen. I recommend this..