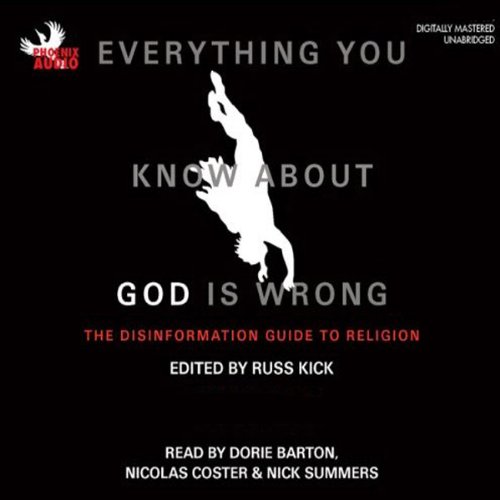 Everything You Know About God Is Wrong, Volume 1

Everything You Know About God Is Wrong, Volume 1

More than 50 writers, reporters, and researchers invade the inner sanctum for an unrestrained look at the wild and wooly world of organized belief in the mega-anthology Everything You Know About God is Wrong, VOl 1 & 2. Among the dozens of essays in Vols. 1: Richard Dawkins shows us the strange, scary properties of religion; Douglas Rashkoff exposes the trouble with Judaism; and Paul Krassner revealshis "Confessions of an Atheist", Other highlights include Gary Greenberg's fascinating discussion on who really wrote the Gospels and Sam Jordison's enlightening "Weeked with Osho," among others.
Public Domain (P)2008 Phoenix Audio

I originally rated this book with 5 stars, it is a very important collection of facts about god concepts and holds high value for many of the articles in it.

The narration is well done and the multiple voice method works well, however Audible and Phoenix have let us down in significant ways with the farce of this audio book. They have segmented a book available on Amazon for only about $17 into two books here for considerably more money. And they did a very poor job of formatting the audio as well. There is no sense to how the "chapter markers" relate to the content and often end in the middle of individual articles.

Further I am not sure how this can be unabridged when one of the chapters is a photo essay on Christian Snake Handlers. How does one do photo in Audio form?

If I were to live this part of my life over again I would have bought the kindle or in book form and had the whole thing for much less money, with correct chapter segmenting, fully unabridged, and easily referenced. As it is it would still be less expensive for me to buy the whole paper book, or ebook rather than buy volume 2 on Audio.