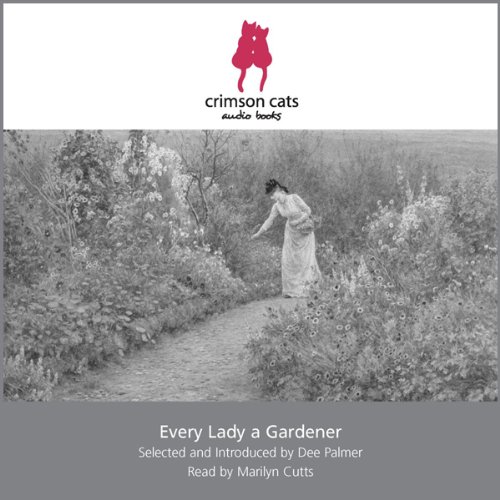 A selection of writings about gardens and gardening by six 19th-century women, compiled by Dee Palmer. The selections in this recording are from The Florist’s Manual by Maria Jacson (published 1816), Every Lady Her Own Flower Gardener by Louisa Johnson (1839), Practical Instructions in Gardening for Ladies by Mrs Jane Loudon (1840), Days and Hours in a Garden by Mrs Eleanor Vere Boyle (1884), Pot-Pourri from a Surrey Garden by Mrs C. W. Earle (1897), and "Selections from the writings of Gertrude Jekyll" (1899 - 1918).

Compiler Dee Palmer is a journalist and writer with a special interest in gardening. When she started the research for this audiobook, she expected to find many differences between the experiences of 19th-century women gardeners and those of today. Instead, she was struck by how modern much of their advice is, and her personal selection from the writings of these six women reflects that.

Reader Marilyn Cutts graduated from Manchester University with a degree in English and a post-graduate diploma in drama. After starting at Derby Playhouse, she had her first taste of a commercial musical with a tour of Godspell! In 1983 she co-founded the group Fascinating Aida with Dillie Keane, leaving to pursue a solo career after the group was nominated for an Olivier award for their 20-year reunion tour, One Last Flutter. Her voice over work varies from documentaries, such as Defender of the Children for Yorkshire TV, to education tapes for IT students.

"These extracts from six women gardening writers covering the century after 1816 are delightful. The suggestions for choosing border plants for colour blending and habit are just as pertinent now, almost two centuries later. " (Rachel Redford, Observer)

What listeners say about Every Lady a Gardener

I bought this for my mother and myself, fellow gardening souls to enjoy on a short trip- and, oh WOW was it a fabulous listen! We LOVED every perfidious morsel- such a perfect book for women gardeners old and young.

What made the experience of listening to Every Lady a Gardener the most enjoyable?

I really enjoyed the historical aspect of this reading; the advice of 19th and 20th century lady writers who enjoyed gardening as much as many of us do today. I found the narration, the aristocratic English accent, completely charming and perfect for the reading.

I used this as motivation for getting out into my own garden and as inspiration for keeping me there. I listened to it twice while tending the veggies, trimming the ligustrums and planting my own...."DOLLiahas". My only reservation is, on review it is an abridged version. I would love to hear the un-abridged! I found it a beautifully done reading and a lovely and inspiring investment of my time.