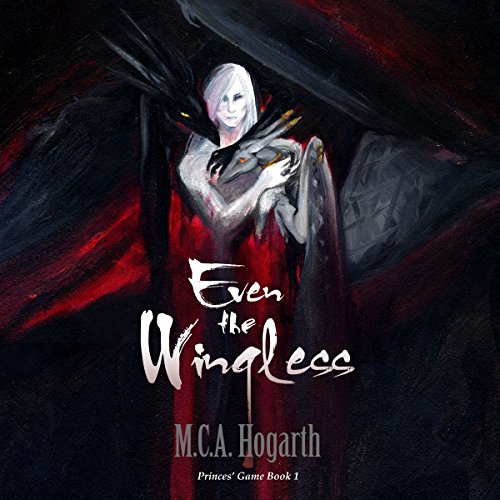 The Alliance has sent twelve ambassadors to the Chatcaavan Empire; all twelve returned early, defeated. None of their number have been successful at taking that brutal empire to task for their violations of the treaty. None have survived the vicious court of a race of winged shapechangers, one maintained by cruelty, savagery and torture.

Lisinthir Nase Galare is the Alliance's thirteenth emissary. A duelist, an esper and a prince of his people, he has been sent to bring an empire to heel. Will it destroy him, as it has his predecessors? Or can one man teach an empire to fear... and love?

What listeners say about Even the Wingless

With over 1100 books downloaded, this book will reign as one of my all-time favorites, easily within the top 3. It's a book with some difficult subjects (i.e. non-consensual m/m & m/f sex) addressed throughout and handled necessarily and to great effect. Surprisingly, it's also a book with no profanity and only sexual innuendos, implied sex, but you get the picture. Though there is no detail, no explicitness provided. It speaks to the brilliance of the author. The dialogue, though often antagonistic, has great wit. It was one of the great joys in the listen. It's a book about power, it misuse & abuse, its development within persons, and its various forms. It's also about personhood in its complexities. It balances depth and warmth with gravity and understanding very rarely experienced in fictional books, IMO. READ IT! I'm off to download another book by this author. I've gotten a new favorite author now too.

Very potent story with many layers, not just sex.

This is a story in which I can loose myself, I want to listen again, crack the bones and suck out the marrow, to find every little touchstone of thought and self within. The sex is only the bit of git around which the oyster builds the beautiful pearl.

This is a HARD story and a POTENT one. It is not a pretty tale, nor a clean one. I cannot stress enough, this is not a story for children or the immature. All that said, it is also a highly satisfying story, while avoiding cliche and the usual sorts of deus-ex machina that is usually employed to bail a writer out of the corners they paint themselves into in blind attempts to show pain and suffering of the main characters.

The story is about growth. About planting seeds and tending them until they germinate and begin to grow, hopefully to thrive. Fertilizing those seeds are harsh trials and terrible -- usually only implied -- details that serve to give depth in what would otherwise be a dull yarn of diplomatic cat&mouse. Thankfully M C A Hogarth spares us this fate.

'Even the Wingless' is far more Machiavellian than pornographic. While some of the sexual topics are shared with Anne Rice's 'Claiming of Sleeping Beauty' or E L James's 'Fifty Shades of Grey', it reads as deep as Tolstoy, Milton, or even Dante. If you choose to open yourself to this tale, look for its layers, peel them apart and enjoy them for their well crafted construction, just be prepared to discard the fruit's rind if its taste is not to your liking.

This book will require aftercare

This book hurt the whole way through... and I couldn't stop listening. There are a lot of mature themes, and they were tastefully handled, and mostly there to support the story.

Homoerotic cross-species S & M tale ... not for me

Something that does not include cross-species rape scenes.

Initially I was drawn in by the story's sci-fi setting. Who wouldn't be intrigued by an elfin, dualist ambassador entering a draconian empire (populated by actual dragonoid beings) to pit his bravado, whits and martial skill against a vicious race of star faring, imperialistic lizards. I was also drawn in by the vulnerability the protagonist's empathic nature posed when he is submerged in an ultra-violent, alien society.
But when the main character perceives his ambassadorial goals might be furthered by enduring repeated sodomizing rape by a huge dragonoid emperor...well...lets just say my level of empathy with the protagonist evaporated. As did any interest in finishing the story.
While I do not condemn anyone whose tastes run to a nice interstellar, enter-species, homoerotic, sadomasochistic love story - mine do not. Nor was I please to discover this fact well into the story.
Steer clear if you also find this outside your tastes.