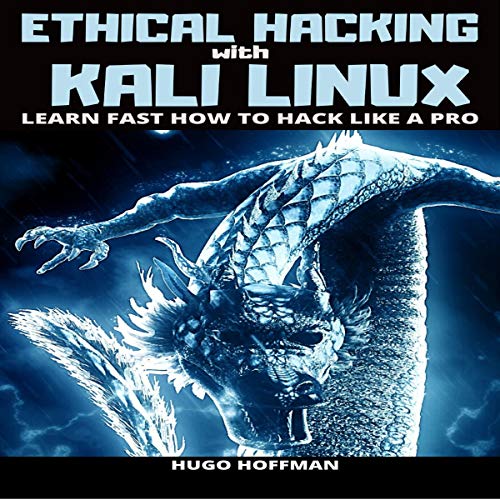 Ethical Hacking with Kali Linux: Learn Fast How to Hack like a Pro

By: Hugo Hoffman
Narrated by: Scott Clem
Try for £0.00

The contents in this audiobook will provide practical hands on implementation and demonstration guide on how you can use Kali Linux to deploy various attacks on both wired and wireless networks.

If you are truly interested in becoming an ethical hacker or penetration tester, this audiobook is for you.

This audiobook will cover:

Note: If you attempt to use any of this tools on a wired or wireless network without being authorized and you disturb or damage any systems, that would be considered illegal black hat hacking. Therefore, I would like to encourage all listeners to implement any tool described in this audiobook for white hat use only!

Buy this audiobook now and get started today!

What listeners say about Ethical Hacking with Kali Linux: Learn Fast How to Hack like a Pro

This is a straight forward and easy to understand

I was actually impressed by how much useful information squeezed in such a short book on hacking. Overall, the book gives enough information as a portal to hacking. It is indeed an important audiobook.

I really inspire to listen this audible

This book is so informative.

The information and tips are useful in this audible. All described ways of hacking have long been experienced by me but I enjoyed this listening.Thanks a lot Author.

I found this audiobook is so helpful for me!

I was actually impressed by how much useful information squeezed in such a short audio book on Hacking with Kali Linux. This audio book causes me to profoundly make a few information investigation effectively. This is absolutely the best one.

This is a great inspirational audio book.

This computer hacking guide has added many informative tips and tricks by Author. This guide for beginners. If you stay beginning stage so that's the perfect audio guidebook for you.

This book is really amazing and useful book. I am impressed with the wealth of knowledge that the author imparts and found the speaking very entertaining as well.I am very glad to listen this book.

This is absolutely the best one audio guide.

I would definitely recommend for beginners even if you already know what Linux is and have a firm grasp of where it came from, this has some depth to the Linux origins and what each Linux distribution offers. Overall I like the book easy to listen and follow.

I was a skeptic when I saw it. This book is not going to make you a super hacker or anything like that but it is well listen, Has practical and useful information. The chapters are the perfect length, not too long, not too short.

This book if you are just getting into Kali. Great explanation of all topics so far. Helps you set up a Virtual environment to follow along with. Walks you through steps and shows you how and if you want to learn Kali and end with firm understanding of Kali when you finish.

I really liked this book and it was a great listen, not too long, not too short, it was the perfect amount. Coming from a programming background and already knowing a bit of linux, I found the chapters to be quite informative and well presented, and will take you anywhere from, many here have said that the book will not teach hacking, and that's half true.

I love it and suggest it.

Very nice and simple audio book. To the point. It provides basic understanding and knowledge about Kali Linux. Also, tools that can be used and materials to advance in this world.

There are a few great chapters in here that are specifically geared towards Kali Linux, however if you are looking for a audio book on Kali Linux you may want to look elsewhere. This audio book is best for somebody with no Linux knowledge.

This audio book teaches students how to use Kali Linux tools and techniques properly and ethically. It provides a clear explanation of every step of the way so that any aspiring hacker can understand all concepts and practice what they learn. I would like to keep this audio book.

I really appreciate this audible.

In this audio book have an excessive quantity of information and outstanding incorporate about Kali Linux. The starting is hard specifically for amateurs like me who needs to get customary to everything.

I love it and following this guide audiobook.