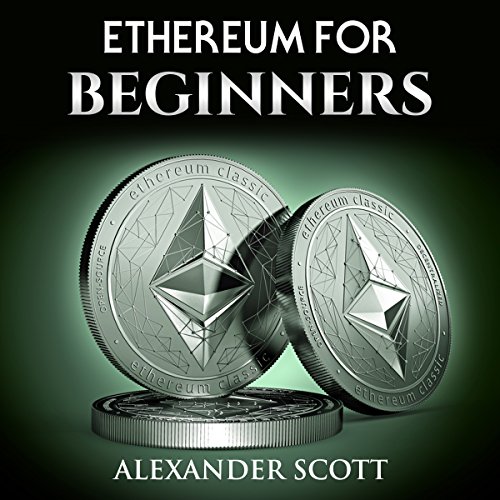 Ethereum was proposed in late-2013 by Vitalik Buterin, a cryptocurrency researcher and programmer. Development was funded by an online crowd-sale during July through August, 2014. The system went live on July 30, 2015.

What listeners say about Ethereum for Beginners

For the IT professionals, or the technology enthusiasts, this is a great primer on the crypto-currency called Ethereum. It does have a lot of buzz words and technical jargon, but I thought it was still relatively concise, and informative. If you aren't interested in something as esoteric as crypto-currency, this is probably not the book for you.

NOT for beginners. Most of it totally flew by me. It was really dull as well so that didn’t help. It’s hard to listen to and wade through. The narration was decent enough.

Good information about this cryptocurrency and blockchain.

What I knew about ethereum before I listened to this.........
--(space intentionally left blank for the record)
What I know now about ethereum...
--it is not bitcoin


Im not sure if it was just me but most of the book went over my head after the first section. It was pretty dry and seemed more like a sales pitch than any real informational book. If you already know a touch about it this book might fill you in on more of what its planned to grow into and how its going to go about that. If you however are like me and were just mildly curious about why everyone was so hyped for crypto currency.......you may be disappointed.

For those with existing bitcoin knowledge

Depending on how you define a beginner this book may or may not suit. It's not really for anyone who has heard of Ethereum or it's digital current ETH and is just wanting to know more, but is instead for someone who already has a strong understanding of digital currencies and distributed computing and is a beginner for Ethereum only.

The book opens with buzz-word and technical jargon and doesn't let up. It explains some things, but presumes you have a solid understanding on the topic to begin with and is just filling in specifics for this particular brand.

It goes through the history of ETH's creation, followed by some of the advantages of it over other similar systems.

So if you have dealt with Bitcoin, but are interested in Ethereum, then this book is aimed at you. If you are wondering what digital currencies are and how to get into them then go for something else.

Narration by Stephen Paul Aulridge Jr. is good. Well paced and easy to follow. He makes a technical book easy enough to follow along and doesn't stumble over what is rather technical and convoluted ideas.

It was a great start to understanding Ethereum I started thinking of some ideas I could use Ethereum for. Still skeptical about cryptocurrency but I think it is because it is money.

While not a &quot;Ethereum for Dummies&quot; this book is a good starter listen after you've done a bit of research for yourself. If not, a lot of material covered in this book will go over your head.

While it's not the end-all-be-all description of Ethereum (I still have quite a few questions about it and its components after listening to this) it answers several questions that had formed in my head after a bit of research.

The narration was crisp, professional and dynamic. Mr. Aulridge has a great narrators voice, and does an admirable job with this piece of non-fiction.

This audiobook was gifted to me in exchange for an unbiased review.

Wow! We are already in the future!

Excellent introduction and overview of a technological advance that could change the way we exist digitally forever. I thought it was just another crypto-currency, boy was I wrong.

Absolutely intriguing! Well written, researched and presented. This will save you countless hours of poking around on blogs to get the same information presented here in a logical and convenient format.

The narrator did an excellent job.

I'd been curious about Ethereum but had never gotten around to researching it. All I knew before was it had something to do with cryptocurrency. This was a really good intro which contains a surprising amount of information in its short 30 minutes. Holy cow. I was expecting a fluff piece that I could give to my dad. Nope. Despite being an intro, this gets into some technical territory. Nothing unmanageable, but far more than I was expecting.

Thanks for the crash course.

Eficient use of time

A first breaktrough in the area of an alt coin to bitcoin. A promissing project that will be a good bet.