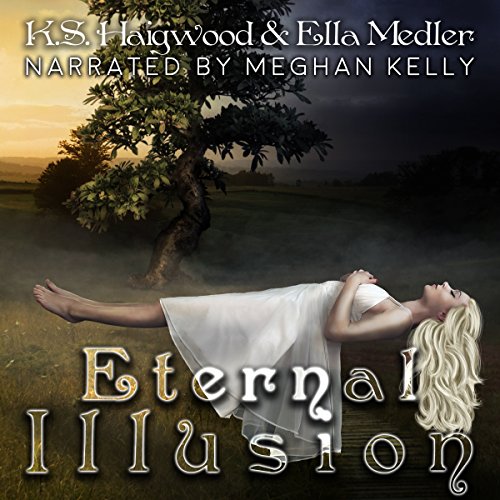 Eternal Island weaves its magical enchantments into every one of its people's hearts. No one, human or immortal, is immune to the fiery touch of love.

But trouble begins to brew anew when, with the last arrival, a malignant entity also makes it onto the island. Seeking to settle an old score first, he relies on dark magic in his pursuit to rule the world. Manipulative and possessing qualities that make him hard to identify, let alone defeat, he can only be sensed by one person.

Katrista's dreams hold the key, but will anyone believe her, or will they allow an illusion to destroy them all?

What listeners say about Eternal Illusion

The Queen of paranormal romance K.S.Haigwood she done it again plus great narrater too
A place where vampires rule, witches play, danger lurks and dreams really do come true.
Eternal Island is a paranormal suspense novel, deeply rooted into myth.
Amazing book glad its a series
well done K.S. Haigwood, Ella Medler great pair of writers you are

I have followed this series from the very beginning - with the very first audio book of Eternal Island then on to Eternal Immortality and here we are on at Eternal Illusion. I am totally enjoying this series

this was awesome.. i loved the story of course.. she is an amazing author.. and the narrator did such a good job bringing the characters to life.. they had emotions.. they had feelings.. they had love and laughter and issues.. it was all together a wonderful audio book and narrator.

Once again I’m drawn in to another great book!!! I have enjoyed all the books I’ve listened too, and the narration is great! Can’t wait for more!!!

This has vampires, immortals and shifters- very paranormal. If you enjoy paranormal as much as I do you will enjoy this. This is a great story and the narrator makes the characters come to life with different tones of voice and pitch changes. This book has enough back history to be a standalone but i liked it enough to get the other books in the series.

Of course another great book from this author, Narrator was great also. Stories about love ,vampires and witches and she does it so well.

ONE OF MY FAVS!!! HIGHLY RECOMMEND!!

Sitting here speechless yet again by her novels!! It was exciting and heart warming all rolled up in yummy romance! I can't wait for the next one! Need to know what happens with the rest of her characters! The narrator was spectacular!! She nailed all of the voices usually only in my head!!

This series just gets better and better. looking forward to more of these books.
The Audiobooks are amazing.

More intrigue on the Island

All the engaging characters from book two, Eternal Immortality are back in book three Eternal Illusion in addition to some new additions. Some new budding romances, a lot of new intrigue, and the promise of more in the horizon. This series fun, captivating, and full of intrigue I highly recommend if you are a PN fan and looking for something different on an Island were paranormals are the normal and palace intrigue rules.
Meghan Kelly narrated this third book.

This book keeps us going with the crew on the island. it pulls us in to them falling even more in love. but it will keep you on your toes.

good way to end the series