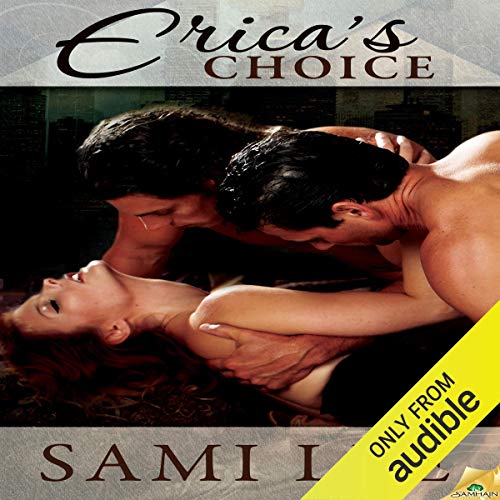 One three-alarm night ignites a firestorm of complications... High school teacher Erica Shannon isn't a one-night stand kind of girl. Pair that with an aversion to relationships, and she's resigned to no love life at all. Then one horrifying discovery propels her off her take-no-risks path, and into the arms of the stars of her midnight fantasies. When his friend and fellow firefighter threatens to make a move on Erica, Corey figures he'd better get over the notion that she's way out of his league - fast - before he has to stand in line. Griff never thought he'd get the chance to introduce Corey to the combustible delights of multi-partner play, until he senses the sheer volume of sexual energy surging beneath Erica's repressed exterior. A blazing night of passion has unexpected consequences. Corey is surprised to discover the woman of his dreams, and that he doesn't mind sharing her - or himself - with Griff. But Griff finds his heart pulled down a romantic path he vowed he'd never venture again. Erica? She's got a problem on her hands. Hold two hardwired-to-rescue firemen at arm's length - and away from her heart - until she's fought and won a battle that may well destroy her.

What listeners say about Erica’s Choice

Don't let the cover put you off!

This book is hot! Really hot! I thoroughly enjoyed this book from start to finish and I was not ready for it to finish when it did. I could have listened to a lot more hours, not necessarily for more hot sex which I'd of appreciated for sure, but for more of their story. I'm longing to know how life played out for them.

One niggle, I'm probably missing something glaringly obvious & I'd honestly love for someone to explain, but the narration was a confusing as hell in the beginning. Three characters, 2 male 1 female, 3 different narrators, 2 male and 1 female seems perfectly plausible but when they all crossover characters & you have Erica pov, words and thoughts in a man's voice, then a different man's voice and sometimes a woman's voice then either of the boys pov, words and thoughts in a differing male voices and a female voice it was confusing at first and I became preoccupied by it before I eventually adjusted to it. In the end I still loved it but I'm curious to know why.

Finally, don't let the cover put you off! It looks like a 70's very dodgy taboo book! The book maybe taboo to some but its as up to date as they come.

PS I think there might be a missing scenario in the book that I was eagerly awaiting and I'm sure I'd have not forgotten it but to be sure I might have to start it over again right away! I'll report back when I'm done!

WHAT A GREAT SURPRISE!

I really didn't have any expectation when I started this book but boy was I surprised! This is a great story with some seriously hot sexy scenes. The characters were very real with real issues. The story didn't have any misunderstanding type of drama which was great and it kept me listening for 8 hours straight! The relationship between the 3 people felt so real, I love when I can feel the connection and attraction. The sex scenes were fabulous! They were really hot and written very well! And last but not least, the narration was AWESOME! The 2 male narrators were very similar and the accents were hot!!!

This is not your ordinary erotica, If you're considering listening to it, I say take the leap it will be worth it!

amazing story. great, emotional plot and wonderfully captivating characters. I read this in a day and couldn't put it down. absolutely loved it and will be buying more from this author!! voice actors were astounding! 5 stars all around.

Lets face it, Im a sucker for MMF romances, specially if it includes MM action, and this book had it all... Then why did I feel all throughout the story that something was missing. It had all the elements for me to love it, but I just liked it. It wasnt bad, but it wasnt great. Good amount of sex, but somehow jumping or just implying the stepingstones of a triad relationship; good amount of feelings, but (as fucking usual) not enough comunication!!! TALK, PEOPLE, JUST T.A.L.K!!!! And give me a break!!!!!
Anyway, it was entertaining and not as bad as some of the stories I've encountered this past few weeks, so 3 stars it is.

The narrators did a great job, I just didnt get the fact that sometimes the female narrator did the guys parts and viceversa. Who decided that? If you have three narrators (and good ones at that) take advantage of them!!!

No contrived drama, no dominating male jerks, no female doormats who allow themselves to be abused and degraded. Just a fun, sexy story that entertained me while driving. Yes!

I loved every word in this book . I couldn't stop listening it was just that good ! I laughed I cried and then laughed some more. The chemistry between Erica,Geoff and Coreywas off the charts. Only one thing could of been better - if they'd actually had a baby . Erica deserves a baby lol . Ok I'm obsessed with this story maybe because I'm a breast cancer survivor and thestory made me cry 😢so hard but even those years were worth it because the end was so perfect well almost perfect !

This book was surprisingly deep and emotionally complex for a menage romance. A lot of the menage romances gloss over the emotional complexity that comes along with multiple partners as well as the complicated logistics of it. This book also dealt with some pretty heavy subject matter in regards to health and medical choices. The narrators were great, especially the female narrator.

My only minor quibble was that every character in the triad seemed to have a huge martyr complex and it could get a little frustrating listening to a whole book of characters constantly feeling like they weren't as important to the relationship and so on and so forth but that seems like something that would actually happen in these types of relationships so I can't complain overmuch. I would definitely get another book by this author.

This Book Deserves and Needs a Re-do!

This is a great story and oh, so very HOT-or, it has the potential to be. However, it sorely needs to be rewritten and re-recorded in first person and POV’s need to be rearranged.
All 3 narrators are reading all 3 POV’s which gets confusing-especially with the two male narrators.
They’ve even got Claire Cordingley narrating the MM sex scenes. Epic disappointment!
Which brings me to the worst part. This woman may as well be telling the time!!! OMG! She is so boring. Even when her character is cumming-she may as well be watching paint dry.
One of the male narrators sounds way too old for either of these characters. Can’t say which one because sometimes he was reading Corey and sometimes he was reading Griff. I will find out who he is though and I’ll steer clear of him and Claire Cordingley on future romance novels. I’m also interested in finding out where he’s from because at one point toward the end, he opened a chapter sounding like a mobster from Boston. He’s much better fit for that type of role.
The other male narrator though...WHOA! I need more of him in my life. I’ll definitely be looking for more of his audiobooks!

Consider you're likes and dislikes

For some reason I was expecting this book to be cheesy (not sure why), but I really liked it.

A woman in crisis decides to live out her fantasies with two male friends she picked up at a bar. The trio clicks and help each other work through their issues.