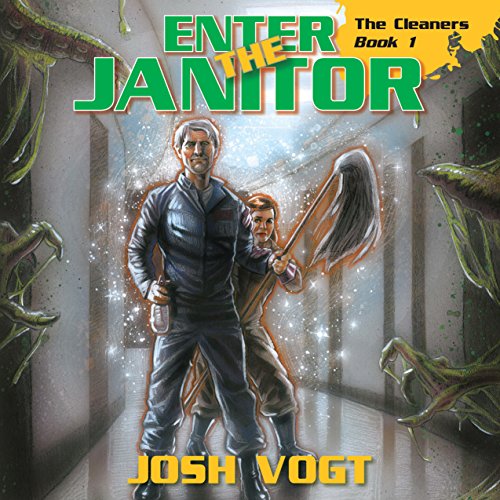 Clean freak college student Dani Hashelheim never imagined she'd discover her latent magical ability in, of all places, a bathroom. But when she ducks into the ladies' room at the library, she's put in the crossfire between an elderly janitor and a ravenous muck-monster that emerges from the sink. Dani's previously unknown power manifests in self-defense, and she floods and burns down the library - at the same time.

Enter Ben, the janitor, who works for the Cleaners, a supernatural sanitation company that keeps reality tidy and safe...and a company Dani now works for as well, whether she wants to or not. This puts a significant crimp in her dream to attend med school and become a doctor. Nor is Ben happy, since it's his duty to help Dani adapt to the job and learn to control her chaotic talent before it kills them both.

Dani barely has time to try on her new company uniform before she and Ben are hunted down by a cult that wants to cleanse all life from the planet, and believes her power provides the means to do so. While fighting to survive the cult's increasingly violent recruitment attempts, the pair must battle dust devils, navigate a maze of mystical sewers, face down trash golems - and scrub the occasional toilet.

What listeners say about Enter the Janitor

It was great to listen to can not wait to read more I hope there is more coming out very very soon.

Beware the monster lurking in the toilet!

First we had Men in Black who protected the world from rogue extraterrestrials and helped relocate friendly ones. Now we have The Janitors, the men and women in green( or pink or whatever color your super swat janitorial suits decides is your best color) who protect humanity from the supernatural horrors that inhabits the pipes, ducts and sewers. Those alligators terrorizing the sewers are not just urban legends. Their mean, their green and they work for Corruption. (Where are the Turtles and Master Splinter when you need them!) Purity and Corruption are at War and The Janitors are the magical marines who police the dark, wet, dirty, damp places of the world and keep Agamemnon from being just one flush away! Fast paced, action oriented, humorous and original, Enter The Janitor is a rare and original Urban Fantasy adventure. Great character development, strange new dimensions and a original plot. Ben the Janitor is forced to take on Dani, a college student studying pre-med who has a fear of dirt and germs, as an apprentice. All she wanted to do is use the bathroom before study group. She ends up opening the door to a twilight zone of supernatural horrors, having a hidden power manifest itself within her and being recruited into the Cleaners, a covert group for the forces of Purity. Magically imbued humans who fight Corruption….And that is only in the first couple chapters! If you are fans of Christopher. Moore, Richard Kadrey, Elliott James, Rob Thurman, Jim Butcher or Seth Skorkowsky. Enter The Janitor is right up your alley. (Just don’t get caught in the gutters, the dead ways between the worlds., ask The Janitor, he will fill you in!

What did you love best about Enter the Janitor?

What I loved about it was that it wasn't a stereotypical paranormal fantasy book, where the heroes are completely ignorant of their abilities but become instant warriors once they have discovered them. In this book Dani isn't Buffy Summers with a clean fetish. She's more Adrian Monk, forced into heroics at mop-point. Ben isn't Han Solo, he's more Grandpa Simpson, irritable and wise but used to being on his own.

I liked Ben. Grumpy old men are just my thing.

This time the scumbags are being taken to the cleaners.

Awesome book. I got a copy in exchange for a fair review, but it was already on my wish list. Grab it for yourself!

Magic is alive and well in the bathroom stall

This is just a fun book...new system of dialog presentation, light hearted, smack talking characters, a little love interest without the in your face sex...like I said it's fun moves right on along. If you are looking for a classic story it would be the wrong choice

Great story. Very amusing. A cross between MIB style group as janitors. Creatures, magic, tech, great characters, great world creation. Awesome story easy to connect with characters. Story has twists, lol moments, cringe moments, and more. Listening speed optimized at 1.25 as usual Michael Gilbo brings a great narration to the table. A bunch of voices and a zany wit. Every story I've heard him do has been spectacular. I received this audiobook for free from the author narrator or publisher for free via audiobookblast in exchange for an unbiased review.

I wanted to like this more than I did

Would you consider the audio edition of Enter the Janitor to be better than the print version?

I can't say, I haven't read the text version

This wasn't a bad book, but I really wanted to like it more than I actually did. Parts seemed confusing, a bit cheesy, and could have been better.

AWESOME BOOK! It was more than what I expected!

What made the experience of listening to Enter the Janitor the most enjoyable?

The characters in this book were so entertaining! The narrator did a superb job in bringing out the best in all of them.

Dani always worried about germs, and the censorship every time they say a bad word had me LOL quite often.

Which character – as performed by Michael Gilboe – was your favorite?

Probably Dani, although they were all great!

The book as a whole. I was pleasantly surprised at how entertaining this book was. I'm looking forward to reading the next one!!

This book was funny, exciting and in some places a near tear jerker. In other words an almost perfect start to a series. The narrator did an excellent job on the voices and I can't wait to listen to the next book.

The crusty old janitor who cleans out the supernatural scumbags gets suckered into mentoring the germaphobic new kid who is clueless about her newly acquired magic talents. The obsessive germaphobic pre med student finds herself in a new form of reality and learning with questionable coping skills. Probably a great book for some, but not for me, especially since I found the narrator's vocal performance grating to my ears.
This audiobook was provided by the author, narrator, or publisher at no cost in exchange for an unbiased review courtesy of AudiobookBlast

What did you love best about Enter the Janitor?

Writing style is really engaging and lends itself well to audio format.

listen to this book, you won't be disappointed!

Such a fun read!

What a fun an unique ride!! It may be a dirty and extremely dangerous job, but someone has to do it! And that falls to the Cleaners, a supernatural sanitation company that not only cleans dirt and grime, but fights the dark and dangerous monsters who thrive in such conditions.

Poor Dani, a super clean freak, who longs to be a doctor, finds out about the Cleaners in the most horrible place ever...., well to her anyway, the public bathroom!! What starts as a normal bathroom routine, again for her anyway!!, ends up with her discovering that she isn't who she thought she was and it also ends with a job she never thought she would ever do, being a janitor. What follows is a fast paced and enjoyable read!

Plot wise, I absolutely adored the fact that the author made Dani such a germaphobe!! It added a lot of levity to the story and was such fun to read! This surprised me in how fast paced it was! I expected with it being the first, it would have a lot of building the foundations to do but not so. The flow of the story is perfect and seamless and it's such an easy book to read that I devoured this in one day! I was glued to my headphones, waiting to see wht would happen our fearless duo ;)

In all, this is an amazing book. It has so many unique and spellbinding elements that you can't help but fall in love with this world and characters the author has created! I urge anyone looking for something absorbing, to give this a go, you won't be disappointed!! Though I will warn you that once you finish this, you will want book 2 ASAP!

Michael Gilboe did an amazing job with this. He was easy to listen to and gave each character their own personality.

* I received a copy of this for review. This in no way affected my thoughts.*