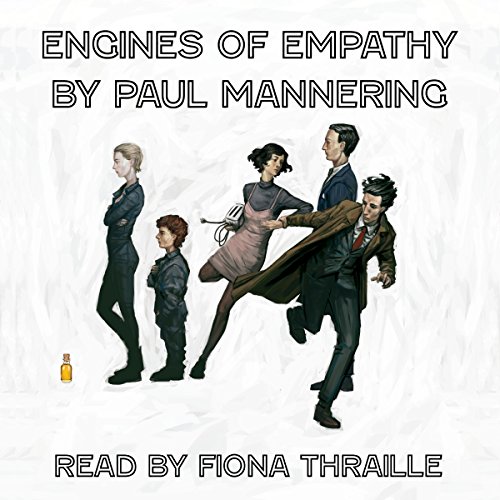 By: Paul Mannering
Narrated by: Fiona Thraille
Try for £0.00

Until this morning, Charlotte Pudding was almost happy with her life. Apart from her homicidal toaster, dead parents, and general ennui. Well, maybe not that happy. Either way, now that she’s on the run from a shadowy corporation, seeking the secrets of her own family history and tolerating the inanities of a retired god, things are looking a bit more interesting.

What listeners say about Engines of Empathy

A wonderfully bizarre and funny adventure

If you could sum up Engines of Empathy in three words, what would they be?

What other book might you compare Engines of Empathy to, and why?

The only thing I could compare it to would be 'Hitchhiker's Guide to the Galaxy' with it's irreverent look at the world of our consumerist society, religion and the dangers of customer service

Which character – as performed by Fiona Thraille – was your favourite?

I'd have to say Drakeforth, she gave him the voice of a man who was truly and stark-staringly insane.

The very end. To say anymore would be spoiling all the spoilers.

If you're looking for something that is truly outlandish and on the short side, this is definitely the audiobook to check out. It was very entertaining once it got started and was very enjoyable.

Engines of Empathy is a very funny book. It is set in a world where all the technology runs on empathetic energy and negative emotional can cause dysfunction in the relationship between a person and their gadgets. I really enjoy listening to this audiobook.

Dry Wit at its Best

What did you love best about Engines of Empathy?

The humor, and the cleverness of the story.

What was one of the most memorable moments of Engines of Empathy?

It's a bit hard to pick one! For me, the best parts were the ones that made me laugh out loud, and it's difficult to pick just one of those!

Which character – as performed by Fiona Thraille – was your favorite?

I wouldn't presume to try and write one of those for this. But really, if you mention empathic toasters, what more would you need?

I've read Paul Mannering's Tankbread as well as this, and love his writing. I really enjoyed the humor in this book as well as the lack of zombies :) He's now right up there with my favorite funny sci-fi authors.

Listen to the preview read the description - i give it 5 stars all round.

Sometimes being nice to your appliances helps!

What made the experience of listening to Engines of Empathy the most enjoyable?

Voice and writing combine very well to give life to a world that, while not our own, is close enough that it doesn't seem completely alien to us either.

What was one of the most memorable moments of Engines of Empathy?

I hate questions like these as they're often very hard to answer without being attacked by spoiler ninjas. Suffice to say that the first appearance of two of the minor antagonists is quite amusing- and very British.

Which character – as performed by Fiona Thraille – was your favorite?

I'm not entirely sure I could pick one, but she does a wonderful job as the lead, Ms. Pudding.

When discoveries are made and choices are chosen. (How's that for non-spoilery?)

The humour is very British, particularly in the character names, such as Pudding, Pretense, and Hopfrog. I love it!

Stuck in interaction with annoying machines, annoying people, annoying situations. Not in the mood for being frustrated by entertainment so I didn't finish it