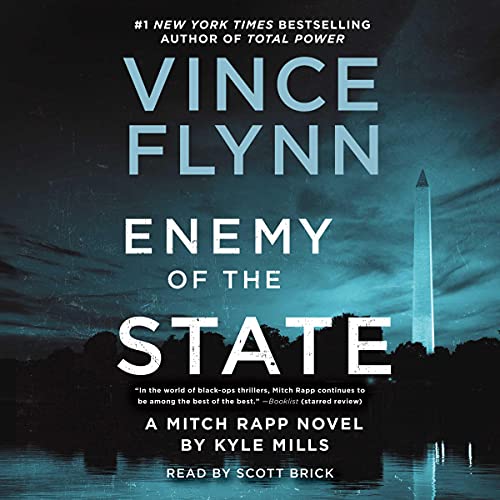 Enemy of the State

By: Vince Flynn,Kyle Mills
Narrated by: Scott Brick
Try for £0.00

In the New York Times best-selling series' latest installment, Mitch Rapp finds himself alone and targeted by a country that is supposed to be one of America's closest allies.

After 9/11, the United States made one of the most secretive and dangerous deals in its history. The evidence against the powerful Saudis who coordinated the attack would be buried. In return, King Faisal would promise to keep the oil flowing and deal with the conspirators in his midst.

When the king's own nephew is discovered funding ISIS, the president suspects that the Saudis never intended to live up to their agreement. He decides that the royalty needs to be sent a message and that Mitch Rapp is just the man to deliver it. The catch? America can't be seen moving against an ally. Rapp will be on his own. Forced to make a decision that will change his life forever, Rapp quits the CIA and assembles a group of independent contractors to help him complete the mission.

They've barely begun unraveling the connections between the Saudi government and ISIS when the brilliant new head of the intelligence directorate discovers their efforts. With Rapp getting too close, he threatens to go public with the details of the post-9/11 agreement between the two countries.

Facing an international incident that could end his political career, the president orders America's intelligence agencies to join the Saudis' effort to hunt the former CIA man down.

Rapp, supported only by a team of mercenaries with dubious allegiances, finds himself at the center of the most elaborate manhunt in history. It's only a matter of time before he's caught or killed. Will it be enough to turn the tables on the Saudis and clear his name?

What listeners say about Enemy of the State

As soon as I stared listening to this book, I was dissapointed. I can't believe the narrator has changed from George Guidall after he has narrated so many of the Mitch Rapp books. Its like the characters have changed personalities. I have loved all the books so far and have listened to the whole series at least three times. I don't think I can even bring myself to finish this book!

Ruined by the narrator

Scott brick seems to be everywhere and everything he reads sounds exactly the same. Unfortunately he also has a voice that I just zone out too and cannot take the story in. I have no idea if the story was any good or not. I don’t give criticism lightly but I have never not finished a book before and I go through about two audiobooks a week.

Good but the weakest of the Kyle Mills books

I been waiting for this for some time and I was not disappointed, I just hope that this is not the last of Mitch Rapp.

mitch flowing at his best with some of the old characters back to help out. a great listen

Once again a good story ruined by a bland reader.
no voices you couldn't tell if it was a woman or man in the story
it was just a boring voice ruining a good story

was a good book enjoyed it!. from start to finish!. looking for the next in the series..

Why has the narrator changed?
just started listening but find it difficult. the new narrator does not get the character for me at all. disappointing.

The replacement of george as narrator for this was a huge error, he may well have been too busy but they should have delayed release, this break in continuity was jarring and the performance lacking completely

I was really looking forward to this book but the story was week and the Narrator killed it. Such a shame but a Narrater can make and break a book and I’m sorry to say Scott Brick has to be one of the worst narrators ever. Time to make a list of bad Narrators. when buying an Audio book you expect, if nothing else a good listen and this was terrible. Very disappointed.

I cannot believe Scott Brick was chosen to replace George Guidall for narration. Hopefully, this is the first and last time he will narrate this series. I’m sure S Brick has his followers but his overly dramatic, breathless oratory does not fit here. There are so many options to choose from: Ray Porter, RC Bray, Jay Snyder, Ari Fliakos or Rob Shapiro.... I think Kyle has done a masterful job keeping the Rapp Series alive and been true to V. Flynn’s characters. It’s sad that the powers that be ruined the audio version by brining in a narrator that is such a bad fit. So sad. Guidall’s Epic voice brings the characters alive and it’s not the same without him- it’s like listening to another run of the mill thriller. Please do Mr Flynn’s legacy justice and bring in a more suitable narrator if Guidall is retired. I can honestly say I will not purchase another Flynn / Mills Audible Book if S. Brick narrates again; I would rather read the next book or re-listen to the past Flynn classics in my library. This failure is 100% on the publishers and producers and you have ruined the experience for loyal Rapp followers. Hopefully, this book will be reissued with a more appropriate narrator if Guidall is not available. Poor. Poor Decision!!!

I have been an avid listener of all of the Vince Flynn books (due to my time on the road). Only two other books were read by someone else other than George Guidall and I wish they could be re-read by George. Very disappointing that this one was not read by George Guidell.

This is Not a Vince Flynn / Mitch Rapp Book

Sorry, I did give it a try. I noticed that Geoge’s latest performances weren’t quite what they once were, but I never expected him to be replaced with, Scott Brick of all people? I gave the story 2 Stars because Scott’s reading is so uneven I can’t really tell what’s being said. You know, in all the years, and many many books I’ve purchased (there’s been a lot of junk) I think I might ask for a refund. This book is that BAD. How could the Producer &amp; Director allow this to be released? I feel sorry for Vinnie’s wife.
Okay, enough from me.

What a mistake!!! Replacing Guidell with Scott Brick!!! I won't buy another Mitch Rapp with Brick as narrator.

I cannot believe you did not use George Guidell

Would you try another book from Vince Flynn and Kyle Mills and/or Scott Brick?

I cannot believe you did not use George Guidell for this book. One of my favorite book series where I am able to get lost in the story with the help of George's different character voices and you changed it to Scott Brick, who I love for historical books, but does not serve as a good narrator for this type of book. I won't order another Mitch Rapp book if George or another similar narrator is not used. I am having a hard time getting through this book. That is a first for this book series. Kyle, you have to do better with your story lines and your choice of narrator. I am sorry.

If you've ever watched the show Friends and remember Joey explaining dramatic acting, then you know how Scott Brick sounds. Joey would stare up and squint his eyes, making a dramatic pose. This is exactly how Brick sounds all throughout the book. It's painful to listen to, unless you speed it up to at least 1.4x the normal speed. That makes it almost tolerable. In short, Kyle Mills nailed it again! Brick ruined the audio version.

Vince was great. Kyle was good. Scott Brick ends this series for me now. Just can't do it with him anymore.

Where is George G. When You Need Him?

While I love Scott Brick ~ he is not Mitch Rapp. The book was a bit slow and plodding and Mitch seemed so indecisive. I'm a die hard MR fan and I hope the series continues but George Guidall is needed and the old Mitch must return.

I just can't get into it with Brick reading. I'm so disappointed. This isn't Mitch Rapp.

George Guidall, you were hugely missed!

George Guidall was phenomenal in his Rapp readings. Why fix something that was so far from broken? Bummer.