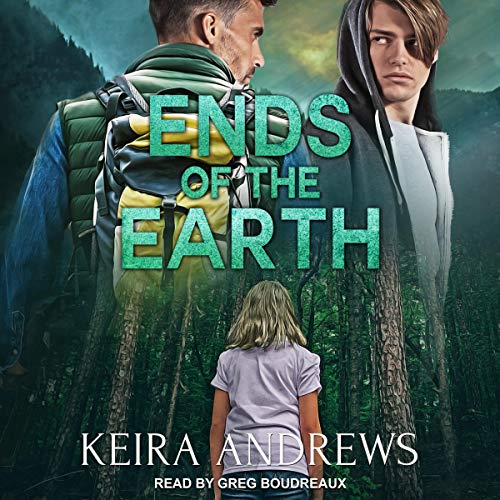 Ends of the Earth

By: Keira Andrews
Narrated by: Greg Boudreaux
Try for £0.00

Jason Kellerman's life revolves around his eight-year-old daughter. Teenage curiosity with his best friend led to Maggie's birth, and her mother tragically died soon after. Only 25 and a single dad, Jason hasn't had time to even think about romance. Disowned by his wealthy family, he's scrimped and saved to bring Maggie west for a camping vacation. The last thing Jason expects is to question his sexuality after meeting a sexy, older park ranger.

Ben Hettler's stuck. He loves working in the wild under Montana's big sky, but at 41, his love life is non-existent, his ex-boyfriend just married and adopted, and Ben's own dream of fatherhood feels impossibly out of reach. He's attracted to Jason, but what's the point? Besides the age difference and Jason's lack of experience, they live thousands of miles apart. Ben wants more than a meaningless fling.

Then a hunted criminal on the run takes Jason's daughter hostage, throwing Jason and Ben together in a dangerous search through endless miles of mountain forest. They'll go to the ends of the earth to rescue Maggie - but what comes next? Can they build a new family together and find a place to call home?

What listeners say about Ends of the Earth

A love story with some nasty moments

Panic when a killer grabs your child then slowely everything goes right, a heartwarming and.

A thrilling adventure, not sure I'd reread though

Ends of the Earth is one of those books that's exceedingly difficult for me to review because I'm conflicted about it. On one hand, I had an enormously good time listening to it, thanks in great part to the stellar narration from the always-reliable Greg Boudreaux. On the other hand, I had a couple minor but nagging issues with it that will probably prevent me from ever deciding to listen to it a second time.

In the plus column, aside from the narration, the writing is fantastic. This is something I've come to expect from Keira Andrews, who is really one of my favorites. Not just the writing, but the pacing and plotting as well; the kidnapping plot goes on JUST long enough to be thrilling, but not so long that it becomes tedious or stressful. I also loved the character of Ben, somewhat beaten down but still optimistic, capable, self-sacrificing, basically embodying everything positive about masculinity. I liked his relationship with his ex-boyfriend, who is a jerk but wisely never made out to be an actual villain. For that matter, I also like Jason's relationship with his parents, of which the same could be said.

Jason, unfortunately, I had some issues with. In fact, for me, he was one of the least likable of Andrews's protagonists (the rapist title character from Kidnapped By a Pirate notwithstanding, since both the title of that book as well as the book itself are beneath her, so I don't really count it). Jason seems great on paper, but something about him bothered me and I never really got over it. Maybe it's the sort of high-pitched, nasal voice Boudreaux gave him, or maybe it's just the character himself, but he just seems incredibly whiny. And that's true even taking into consideration the trauma he goes through here. Maybe it's the fact that he constantly prattles on in his inner monologue about how everyone thinks he's too immature to be a father, while simultaneously going out of his way to prove them all right. Maybe it's the fact that he's self-sacrificing, like Ben, but unlike Ben he's very, very vocal about it. He's constantly making himself into a martyr unnecessarily. Whatever it is, the character sort of bugged me. And yes, the character grows, but it's very late in the novel when he does, and by that point I wasn't particularly invested in him.

Another character that I feel like I should have enjoyed more than I did was Jason's daughter Maggie, who is supposed to be 8 years old. I say "supposed to be" because Maggie suffers from a terrible case of the unfortunately common disease "fictionalchilditis," which is when a fictional child acts in a manner that is very, very unsuited to their given age. In Maggie's case it's recurring, and she has a particularly bad bout of it in the first half of the book. Precocious to the point of absurdity, she manages to show up all the adults around her for the first few chapters. Soon after, she is kidnapped, and good lord above, her actions when she is kidnapped are just incredible. Unfortunately I mean that in the original sense of the word: not credible. Dana Scully herself never acted with such grace and aplomb when she was abducted, and that happened at least once every few episodes. Fortunately her fictionalchilditis goes into remission a bit after the kidnapping, and she settles in for a long bout of saying just the right thing at the right time to make the dumb adults around her see the light, which is annoying but at least pretty typical. And to be entirely fair, I LIKED Maggie, and I don't usually like kids in fiction, so she's well written enough that I was able to overlook it, but it really is irritating.

Anyway, I just went on for two paragraphs about negative things, but I'm still giving the book four stars because it's really quite good. Everything is resolved nicely, though to be honest I'm mainly happy that Ben was happy. If Ben had found his happiness with someone else, and several years later Jason grew up and realized he had been an idiot letting him go, but by that point it was too late, I would also have enjoyed the ending.

The story is great, the narrator is amazing as usual. I'll be checking out her other audiobooks.

Greg Boudreaux is an excellent narrator, so it’s no surprise that he totally rocked this book!! He’s got distinct voices for each character, and his voice for the 8 yr old girl wasn’t dreadful lol (narrated kid voices usually are kinda bad in my experience). I also really loved how in tune he was with each character. Greg really managed to capture the emotions for Jason and Ben and convey them all accurately with his pacing and inflections. It was a delightful performance!

The story.. omg the story!!!! It’s a suspenseful thriller and a hurt/comfort rom all in one! I called this book a unique story because I don’t often find single dad stories that aren’t rom coms or sappy plots. Ends of the Earth is a suspenseful story first almost, with a romantic twist if that makes sense? I really enjoyed the novelty of this plot! My only wish is that it could’ve been longer.

Andrews knocks it out of the park once more. Great match up with the MCs. They had great chemistry. Superb plot and narration.

my biggest gripe is the road isn't 'to the sun' it's 'Going to the sun'. either I heard it wrong every single time or it's wrong. I live there so it irritated me that it wasn't being said right.

I love the romance, the adventure, the angst, the happily ever after, and of course I especially love love Greg Boudreaux sexy and sinfully sex voice narration in every ebook I listened in audible, very addictive listening to him bringing ruggedly handsome Alpha male characters come to life in various different scenarios, and he can equally brings a different tones of voices to other types of characters either male or female or even little kids and made them all distinctively different from each other without loosing their unique colours woven into varying storylines, Greg Boudreaux make and break every single romance ebooks he narrates and this ebook is one of the best that he has done, my only complaint about this book is that it’s too short for me, and the sex scenes a bit scarce, I need more sexy times in this story, but overall I love it very very much, highly highly recommended if you love your romance set in the mountains with hunky rangers making you swoon to your hearts content😋🤓👍