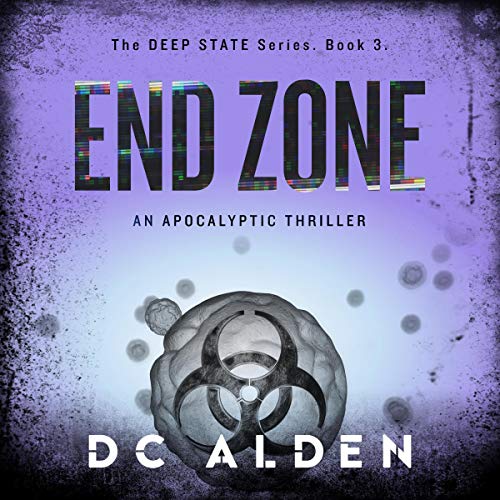 The threat to humanity is clear - abandon all fossil fuels or be decimated by an unstoppable plague.

In the wake of the Baghdad crisis, newly elected president Coffman is battling to get her administration on track when ecoterrorists threaten to unleash a gruesome contagion that turns people into primordial savages.

As the US military-industrial complex mobilizes to neutralize the threat, Coffman and her allies discover a new and unexpected reality.

The virus is not a threat. It’s an opportunity that could deliver ultimate power.

But first, the dominoes have to fall.

The targets are global cities with teeming populations, and Coffman intends to watch them all collapse as the horrifying pandemic spreads across the planet.

Unless she can be stopped. But doing so might set the world on a far darker and dangerous path than anyone can imagine.

And humanity is running out of time.

What listeners say about End Zone: An Apocalyptic Military Thriller

On The Deep State Trilogy… Firstly, you wouldn’t necessarily expect these types of books to be character driven…That would be your first mistake. From the outset of ‘Angola’, you get a sense of how rich a tapestry has been created around all of the main characters, which ultimately results in a deeper absorption and appreciation of the narrative. You would probably expect intrigue, action and surprises – It has all of that in droves. The plot subtly evolves from a localised and personal perspective, to global catastrophe and conspiracies of epic proportions. I always seem closer to stories with a UK presence and viewpoint, and this grabbed me in especially in the early chapters. From a military, tactical and political perspective, I found the descriptions and narrative to be completely believable and on a par with anything I’ve read/listened to before. At no point did I think that ‘this’ couldn’t happen… Genuinely scary in parts – I’m not going to spoil it, but there is something dark, inhuman and terrifying lying just beneath the surface of the pages (narration) of this series, which I found totally refreshing invigorating. You can tell that I really, really enjoyed this series and have know a big soft spot for anything that DC put’s out there – But IMO, this is his best, up there with THE best – For now. Ta, Lee Blakeborough