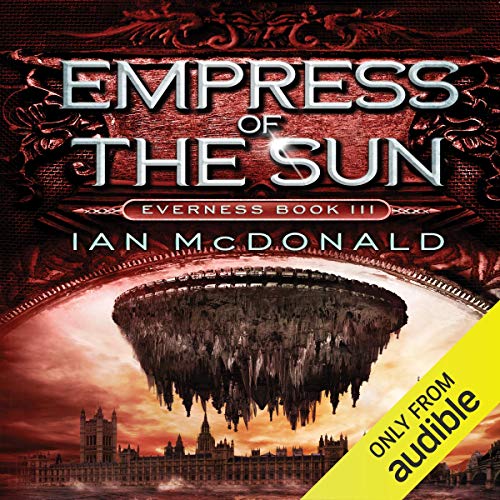 Empress of the Sun

By: Ian McDonald
Narrated by: Tom Lawrence
Try for £0.00

World-hopping, high-action adventure starring a smart boy with computer skills and a tough girl who pilots a blimp. The airship Everness makes a Heisenberg Jump to an alternate Earth unlike any her crew has ever seen. Everett, Sen, and the crew find themselves above a plain that goes on forever in every direction without any horizon.

There they find an Alderson Disc, an astronomical megastructure of incredibly strong material reaching from the orbit of Mercury to the orbit of Jupiter. Then they meet the Jiju, the dominant species on a plane where the dinosaurs didn't die out. They evolved, diversified, and have a 25-million-year technology head-start on humanity.

War between their kingdoms is inevitable, total and terrible. Everness has jumped right into the midst of a faction fight between rival nations, the Fabreen and Dityu empires. The airship is attacked, but then defended by the forces of the Fabreen, who offers the Everness crew protection. But what is the true motive behind Empress Aswiu's aid? What is her price?

The crew of the Everness is divided in a very alien world, a world fast approaching the point of apocalypse.

What listeners say about Empress of the Sun

if you like time travel and parallel world, Dr. Who and super evolved dinosaurs...you're gonna love this one! superb reader! makes it all come alive and really fantastic characters! just cannot WAIT for the next one!!!