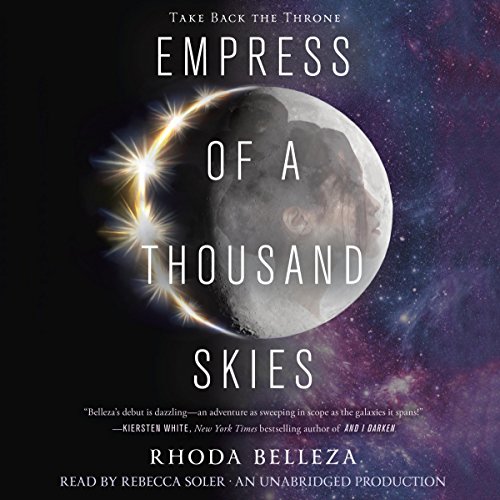 Empress of a Thousand Skies

By: Rhoda Belleza
Narrated by: Rebecca Soler
Try for £0.00

For fans of Pierce Brown and Firefly comes an epic sci-fi fantasy that Kiersten White, author of And I Darken, calls "dazzling - an adventure as sweeping in scope as the galaxies it spans!"

Empress
Rhee, also known as Crown Princess Rhiannon Ta'an, is the sole surviving heir to a powerful dynasty. She'll stop at nothing to avenge her family and claim her throne.

Fugitive
Aly has risen above his war refugee origins to find fame as the dashing star of a DroneVision show. But when he's falsely accused of killing Rhee, he's forced to prove his innocence to save his reputation - and his life.

Madman
With planets on the brink of war, Rhee and Aly are thrown together to confront a ruthless evil that threatens the fate of the entire galaxy.

Rhoda Belleza crafts a powerful saga of vengeance, warfare, and the true meaning of legacy in this exhilarating debut, perfect for fans of Marissa Meyer's Lunar Chronicles and Jay Kristoff and Amie Kaufman's Illuminae Files.

“This is a multiplanet, multiculture, multitech world and a timely tale. An exceptionally satisfying series opener.” (Kirkus Reviews, starred review)

"Fans of calculating political maneuvering and expansive, interplanetary plots will find much to enjoy in Belleza’s Firefly-esque debut." (Publishers Weekly)

What listeners say about Empress of a Thousand Skies

Such an amazing story.

I loved this! I just finished and have no words. Rebecca Soler of course makes the words come to life. I am such a huge fan of her work. This book was exactly what I needed. I have. Been struggling to really get into my books lately. I did stumble a few times since there is just so much going on with the multiple view points but a few back tracks were well worth it. Reminded me of The Lunar Chronicles by Marissa Meyer and I don't say that lightly since it's a fav.

Not really. I've listened to a lot better titles.

Would you be willing to try another book from Rhoda Belleza? Why or why not?

I'm not sure ... I wasn't overly impressed with this one.

What does Rebecca Soler bring to the story that you wouldn’t experience if you just read the book?

Yes, the narration was better than the actual story.

Was Empress of a Thousand Skies worth the listening time?

Ok so I am going to ramble a bit and give some spoilers tho not in detail.

I feel like this book had a lot of potential but failed to be amazing because many things were happening yet we, the readers, didn’t have enough attachment to the characters or world to care. With all of the plot twists, some of which were very predictable, and the continuous introductions and abrupt substitutions of new characters, this book felt like at least two books put into one. Or I felt like I dropped into the middle of everything and the author kept throwing new ideas, new people, new terms and technology into my face. It also doesn’t help that the main characters, Rhee and Aly, narrate their POV and yet never really come together. Yes, they probably meet for real in the next book but still, it doesn’t connect together completely and feels disappointing.

We get glimpses of the stories and the history of the world, like about the treaty or the cube things, yet it would’ve been better to expand on why the history was so important, specifically the treaty. Perhaps a first hand experience from a veteran or a more tangible experience of Rhee as a child experiencing the events leading up to the treaty would’ve helped us readers better understand HOW important it was. All we are told is that the treaty was important for peace and then get dragged into Rhee’s sole focus of spite and revenge. Not only that, if only the author committed more to the world building, we could’ve truly comprehend the fears and shock of what the villain was planning. Heck, the whole there-being-sentient-worlds-working-together-with-humans-in-the-vast-expanse-of-space thing was poorly explained and could’ve been developed better.

Now to the characters...Aly was fine, Kara was fine, even Aly’s robot friend was fine. Rhee, however, got irritating.
I didn’t like Rhee because she kept switching her mind on what she believed in. I know she is suppose to be naive but it got annoying how easy it was to make her doubt everything. Essentially, every new thing she learned made her doubt everything she believed in every single time. Then she didn’t show satisfying character development because she kept blaming her naivety on others, kept rushing into things tho she knew it was dangerous, saw how her empire’s soldiers abused others and never stood up for the abused yet she kept going on and on about how she needed to deliver justice for her family’s death, and so on. Rhee needed to be fleshed out better because her sole focus of hate and revenge and self-centered way of thinking got tedious. Again, if only the author showed us more of Rhee’s upbringing, of how changed she was from an innocent child to a hateful teenager, maybe we could’ve connected or understood better.

Also, expanding on the “introduction and abrupt substitution of new characters” bit I mentioned before... this is the first book of the series. But we got introduced to Rhee, to Aly, to Rhee’s childhood friend and his dad, to the court people, to Rhee’s dead Family, to Nero, to the guy who rescued Rhee, to Vin, to Aly’s robot friend, to Kara, to the soldiers, to the concept of there being other worlds of sentient beings, to a United planets organization, to scientists, to Kara’s Mom...to soooo many people. So many I can’t even remember most of their names. Let me remind you, this is the FIRST BOOK! I’m not even attached to Rhee or fully immersed into the world and yet there are so many new characters and *major spoiler* so many of them DYING that I feel like so many things were rushed and not well planned. And when the characters die, their deaths don’t mean anything really because I never got attached to them! Even when we learn who the true villain is, I didn’t care because there was no reason to fully hate them for their betrayal since we didn’t even get to know them like Rhee did in the first place. So many missed opportunities for the author!

There was a lot of potential in this book but it was poorly executed. Not terribly bad, not epically great, just disappointingly lackluster.

Would you try another book from Rhoda Belleza and/or Rebecca Soler?

I'm not sure I'm even interested in going forward in the series....is this a series, I don't even know, though it was left off at a point where I thought there should be a conclusion, and wasn't.

I did like the narration, was well done, I would listen to her other works.

I was disappointed in this book. The cover art is beautiful, the synopsis sounds like a fun ride, BUT. It's set in a wide universe with many sentient beings. Yet the world building aspect felt forced and like it was too much to remember every little thing that was (many times) only mentioned once. Though I did like the made up language peppered through the characters speech. That felt well placed and natural.The characters were not well fleshed out and felt one-dimensional, there was little to no growth with all of them. Many were just driven by one emotion throughout.

Trying to world build without too much effort. The characters are flat. Storyline very predictable. Only would I recommend if you need an easy read.

i had a hard time paying attention to this book. Not one i would recommend.

Take this with a grain of salt, but I struggled to finish this book. Great world building and interesting premise, but I couldn't get more than halfway through. The storytelling dragged a bit too much for me.