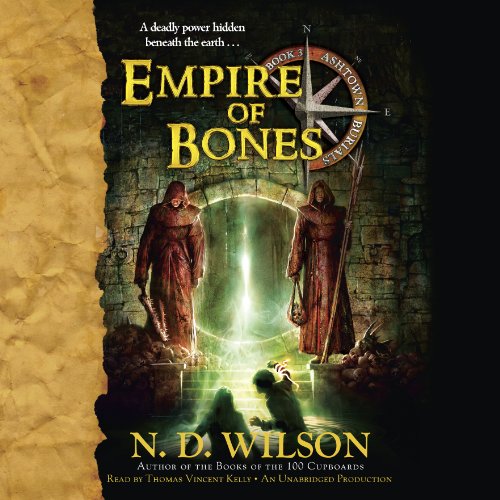 Fans of both Percy Jackson and Indiana Jones will be captivated by the lost civilizations, ancient secrets, and buried treasure found in the third book of the Ashtown Burials series, an action-packed adventure by N. D. Wilson, the author of Leepike Ridge and the 100 Cupboards trilogy.

Cyrus and Antigone Smith have thwarted Dr. Phoenix's plans—for the moment. And they've uncovered a new threat from the transmortals and managed to escape with their lives. Their next adventure will take them deep into the caves below Ashtown, where they will look for help from those imprisoned in one of Ashtown's oldest tombs.

What listeners say about Empire of Bones

I really enjoyed these books

This series fills a need for fun, well-written fiction with a thoughtful message which is sure to appeal to modern audiences. It is better than most authors who write in the fantasy/ science fiction genres. This is the only modern fiction series I have listened to or read which comes close to the kind of insights with which Lewis and Tolkien sought to write. Wilson’s fiction is not quite that deep, but he does deliver a story that satisfies both our sense of adventure and our hunger for something deeper.

This book was released in 2013. Isn’t it time to write another to tie up some loose ends, Mr. Wilson?

excellent narrator. listened to whole series. really good character development but story itself was a little strange and somewhat disjointed. was a little disappointed in sudden end, seemed like left loose ends

I enjoyed the book and the series, but it fell a little short at the end

Can’t wait for the next one!!! Eager to see what will happen to Phoenix and all the loose ends tied up.

great job to all that had a part in making this book. this is the third book of three and all three so far have been great.

This book and series is outstanding! The author did an excellent job creating the story and characters. I really enjoy N. D. Wilson's books!
Thomas Vincent Kelly did a great job reading this book and the previous two! I thoroughly enjoyed these books! Can't wait for the next in the series.

Great, but could use more tests for son-singing

I love ND Wilson's work --especially his reverence for family. I love that belief in the redemption of mankind and the presence of a benevolent Creator Is the warp of his tales. In this series he makes great use of his knowledge of history and mythology to create a vivid and intriguing cast of characters.

My only gripe is that the action is relentless. He has created such a rich world, but we are rarely allowed to bask in its riches. There are so many actions sequences! And the characters take a lot of physical punishment-- more than seems reasonable. I realize that the target audience is tween-aged boys. But I would have loved to have heard more backstories!