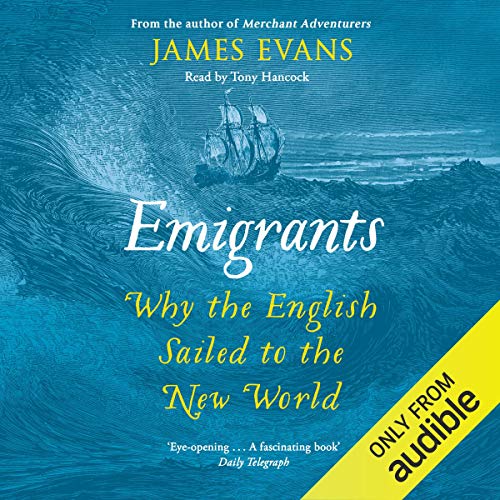 By: James Evans
Narrated by: David Shaw Parker
Try for £0.00

During the course of the 17th century, nearly 400,000 people left Britain for the Americas, most of them from England. Crossing the Atlantic was a major undertaking, the voyage long and treacherous. There was little hope of returning to see the friends and family who stayed behind. Why did so many go?

A significant number went for religious reasons, either on the Mayflower or as part of the mass migration to New England; some sought their fortunes in gold, fish or fur; some went to farm tobacco in Virginia, a booming trade which would enmesh Europe in a new addiction.

Some went because they were loyal to the deposed Stuart king while others yearned for an entirely new ambition - the freedom to think as they chose. Then there were the desperate: starving and impoverished people who went because things had not worked out in the Old World and there was little to lose from trying again in the New.

Emigrants casts light on this unprecedented population shift - a phenomenon that underpins the rise of modern America. Using contemporary sources including diaries, court hearings and letters, James Evans brings to light the extraordinary personal stories of the men and women who made the journey of a lifetime.

What listeners say about Emigrants

Really enjoyed this book, illuminating and insightful and well narrated. Will look for more by same author