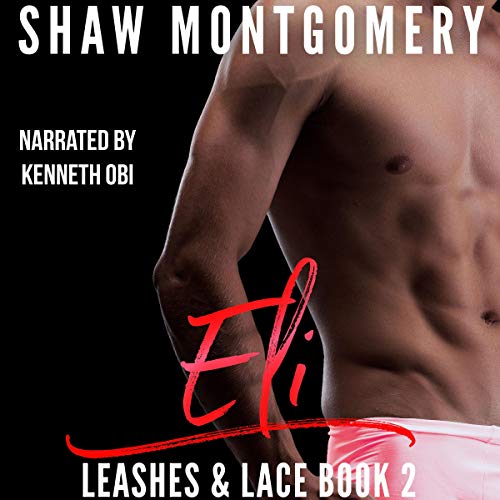 By: Shaw Montgomery
Narrated by: Kenneth Obi
Try for £0.00

Eli knows who he is, and he’s tired of hiding it.

Exhausted and at the end of his rope, Eli’s not just in the closet when it comes to his family, he’s so far in that he’s starting to lose himself. When Elijah, the straight, boring businessman to his family, and Eli, the blogger and lingerie model to everyone else, start to clash, Eli begins to realize how much it’s affecting every part of his life...especially with Roman, the fiery photographer who drives Eli crazy.

Roman’s tired of insanity and drama queens, even sexy ones who make his pulse race.

A bad breakup left Roman broke and skeptical of getting involved again, especially with a brat who feeds off drama. With his bank account and patience drained, Roman feels cornered and at his limit. Leashes and Lace was supposed to be a fresh start for the photographer, but with Eli showing up at every turn, he’s not sure if he’s found a new career path or made the worst decision of his life.

When killing each other isn’t an option, there’s only one way to release all the passion that flares between them, but sex can’t solve everything...or can it?

What listeners say about Eli

Nice and angst-free story. I just wished that there were more scenes of Eli and Roman on page than their interactions off-page being told.

Sparkles fly from the beginning as their anger towards eachother is insane. And others! One brattiest brat and one hurt, frustrated so tired of brats in all forms. What could ever go right??? Hotter than hot!
And Kenneth as usual nails the narration!

Eli is such an adorable brat! I love him and I really enjoyed his story! And the narrator was brilliant as always. Great character voices!

It’s fun and has a little angst

They say you should never judge a book by its cover, Roman is definitely guilty of this

The audiobook is performed well and has the characters spot on

My only negative is it’s wasn’t long enough

I love Eli and there is just so much more to him than meets the eye and I loved his journey and life. I felt for him and the mask he had to wear and his inability to no push too far or hard. His connection with Roman indefinably set the pages on FIRE and I loved every minute! Eli's passion often overflows and he does have a knack for drama with extra sprinkles!!

Roman is troubled and unfortunately, he takes some of this out of Eli, while Eli is oblivious to how badly he is pushing and even hurting Roman, they have no choice but to explode and try and collect the pieces. I enjoyed both characters finding themselves and could really feel that these two were made for each other. I loved this book! It was a fabulous and sassy read/listen!!

If you love super sassy twinks in lingerie and dominant, gruff yet caring photographers then this book is perfect bound in the pages! Highly recommended!!

Love 💘love 💘 please give me more! The narrator was perfect for them and I would love 💘more please😍

The performance from the narrator is also very important for me. I can't listen to a lot, because my English as a non-native-speaker isn't so perfect to follow a whole story over hours, when the narrator speaks too fast or too sloppy. Normally I have to SEE the person, who is talking to me in English. Kenneth Obi is one of the 3 narrators (so far), I can listen without break and have no problems to follow. I'm just not yet finish with the book, but I listen enough to give a review.

My favorite kind of enemies to lovers romance, Eli is fun and fast-paced, with creative characters and a very happy ending. The second book in Shaw Montgomery’s Leashes & Lace series, there is some overlap of the storylines and I’d recommend reading these books in order.

Broke and reeling from a devastating breakup, professional photographer Roman accepts a job at Leashes & Lace. Sassy models rule the roost, and Eli is the most outrageous of them all. Eli’s flamboyant self-confidence immediately attract Roman’s attention, (and how sexy he looks in his lacy panties doesn’t hurt either). Roman is the first to admit that brats are his kryptonite, and resisting Eli turns out to be impossible.

A complex character, Eli is living a double life. He hasn’t come out to his family and is torn between pleasing them as Elijah and being true to himself as Eli. For me, watching this poised, assertive young man work through his journey is a highlight of the story.

Kenneth Obi turns in a wonderful performance in the audio edition of Eli. His gruff, dommy voice is perfect for Roman, and it’s obvious how much fun he has with bratty Eli.

So I loved reading Eli (and the rest of the Leashes and Lace series). Shaw Montgomery is a fantastic author who writes amazing characters that leave you wanting more. Every single character’s story grips me and makes me read and re-read. They have a way of writing a story that’s magical. When this magical writing gets combined with the magical narrating talents of Kenneth Obi - oh my goodness it’s beyond amazing. Roman’s voice is on point, and Eli is just so...completely Eli (if you’ve read the series you’ll know!). Definite must listen!

I love getting to hear Eli and Roman's story. There were at odds from the beginning and it was very interesting to see how these two end up working things out between them. This was another great story.

I listened to the audio version and it was very enjoyable.

What a fantastic book. The emotions just fall off the page for this instalment of the Leashes & Lace series. Kenneth Obi has done a brilliant job with the emotion in this book. I am looking forward to book 3.

I read the first book of this series and liked it so I thought I would enjoy listening to the 2nd one. Couldn’t get into it very well. Had to keep turning it off. Finished it but it took several days. Love the series will have to finish it by reading them.

I love Eli! He is so bratty, but for a good reason. Roman does an awesome job of taking him in hand when they can finally work there issues out.
So excited for the next in the series.
Love Kenneth as usual. Cant imagine anyone else doing these boys justice.

Funny, sex, with the right amount of feels. I am really liking these series. The narrator does such a fantastic job jumping from sassy twink, to Alpha male you forget it is only one person.

Kenneth Obi took Eli's bigger than life personality and brought it to life! He was spot on! No one can throw a tantrum quite like Eli can, lol.

I loved this so much!!!
Eli and Roman have my favorite type of relationship! Full of sparks, sass and emotions!!
Narration was fantastic. Kenneth Obi brought great energy to this audio.

Overall I really like this series, the characters are fun and well developed. This particular book was good, but I am not a big fan of “brats”.

Kenneth does a nice job with the narration, he has a great whine for Eli’s bratty craziness.

Eli and Roman are fun passionate and dramatic.

If you like smart bratty brats, spankings, lace and an HEA then you would enjoy this and Kenneth Obi does a great job bringing these guys to life :)