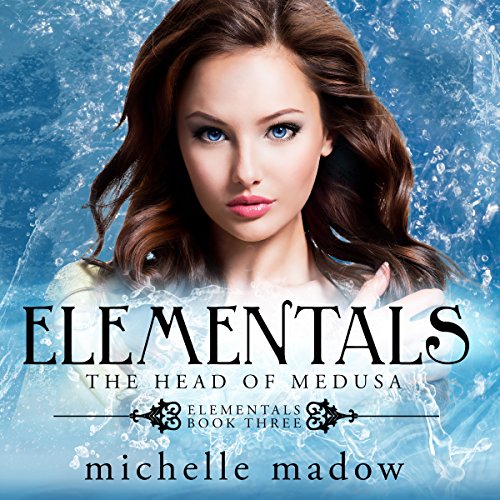 Elementals 3: The Head of Medusa

Elementals 3: The Head of Medusa

The epic story of witches, gods, and monsters that USA Today called a "must listen," continues in the third book of the Elementals series!

When Nicole Cassidy moved to a new town, she discovered that she was a witch descended from gods. But that was nothing compared to learning that it was up to her and four others with mysterious elemental powers to help save the world from the Titans, who would soon return to Earth.

Her relationship with Blake - the fire Elemental - is finally heating up. But she must remain focused, because Typhon, one of the deadliest creatures in history, has escaped from the weakening prison world. Only one object can destroy him - the head of Medusa herself.

Follow the Elementals as they journey to the end of the Earth, facing choices that will put their lives and the entire world at risk. Will they all survive the mission? Find out in the riveting third book in the Elementals series, The Head of Medusa.

A thrilling fantasy adventure in a contemporary setting with Greek mythology and sweet romance, Elementals will keep you on the edge of your seat wanting more!

I loved the story and the narrator Caitlin Kelly bought the story to me making it seem like I could see the action as she read. Michelle Madow is very talented in spinning a great story.

Book 3 continues this great series. I loved this concept of witches descended from Gods from the start and it just gets better with each book. This author writes out of the box and I really lover her originality. This was the first of the series I listened to in Audiobook - the others I read. I really enjoyed the Audiobook version. The narrator did a great job with easy to understand and distinguishable character voices. I look forward to more from this Author.

WHAT! What just happened! I must listen on!


Once again another fantastic book I could not put down and total clift hanger! on to the next book!

Loving how this story is progressing

This third installment left me with wanting to continue on. In this the Elementals need to get the head of Medusa but first they need the golden sword. It is full of action and adventure and a couple twists I did not see coming.

Percy Jackson has nothing on this

I really liked this book. It's like Percy Jackson meets the other Demi Gods. BUT Percy has nothing to do with these warriors.

If you like the Percy Jackson series, then you'll love this book. the only thing I didn't like was it was over too soon

How could this not be fantastic, everything this author has written is beyond amazing. The narrator was easy to understand and a great voice.