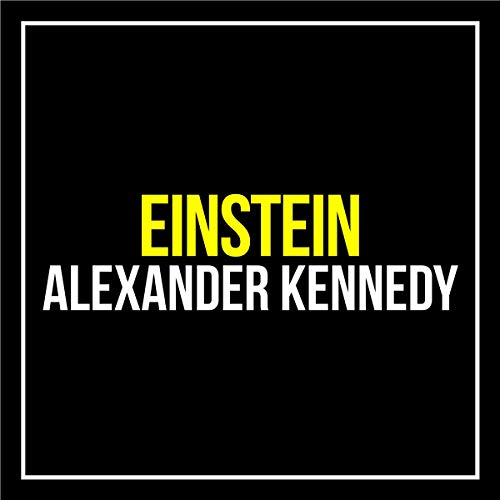 Albert Einstein was named Time Magazine's Man of the Century. He pioneered modern physics, created the Theory of Relativity, and became a world-renowned celebrity. Enjoy the surprising and entertaining true story of Albert Einstein and rediscover one of history's most prolific figures.

My husband is a big fan of Einstein, so I purchased this audiobook as a gift for him. He listened to it in one sitting, while driving cross-country, and the review pertains to his opinions about the book.

This is a new book, not merely an audio presentation of an old book. It was nice to hear a fresh presentation of Einstein's life and works. It was quite brief, however, and did not seem to be a complete "book" worth. There is also no documentation, such as you would find in a book's footnotes. While this is explained upfront, it is still frustrating to anyone wanting to separate fact from fiction, or find more information.

My husband's biggest complaint was actually that he could not always understand the Einstein quotes completely, since the German accent used to portray them was very thick!

I received this audiobook free or at a discount in exchange for my agreement to provide an honest review. My Amazon review profile demonstrates that this does not compel me to say good things about bad products. ;)

Would you try another book from Alexander Kennedy and/or Jack Nolan?

Absolutely not. he is not a writer who researches his content adequately enough for him to understand it let alone write about it.

What was most disappointing about Alexander Kennedy’s story?

The whole thing. He lies and bases opinions off of made up events that did not occur.

It was ok. Boring.

The only redeeming quality was the end so that I knew the pain was over.

This book I presume was to serve as a historical insight into the life of Einstein and his accomplishments, views, and perspectives. As an avid Einstein fan and self-proclaimed expert, this author needs to do a little more research into the man's life along with the dynamics of physics and the physical principles that govern our existence, the world around us, and how they interact. Einstein was not a religious man. He was also not a self-proclaimed atheist. The author seemed to have misinterpreted some of Einstein's written works regarding religion. For example, take the following quote:

"A knowledge of the existence of something we cannot penetrate, of the manifestations of the profoundest reason and the most radiant beauty - it is this knowledge and this emotion that constitute the truly religious attitude; in this sense, and in this alone, I am a deeply religious man."

If you only read that lat sentence than you may think they he is indeed religious however that is not at all what he is saying. He is saying that the world around us is so complex and beautiful that is it not possible to exclude a force which we cannot account for. It is his knowledge of this complexity that constitutes what he calls "my religion". Now religion is somewhat of a misnomer (which I believe he well understood and intended) because it implies a theological origin for which he never EVER admits to believing in nor disbelieving in.

As an former engineer and lover of physics, I could not help but fixate on the utter inaccuracy of the ideas presented. For instance, Kennedy asserts that if a cannon ball was dropped from a moving ship at the bow, the individual dropping the ball would see the ball his the ship while an observer on shore would see it land short of the ship into the water. This is purely idiotic and incorrect. Writers should not try to interpret physics unless they are educated in such matters. If Alexander Kennedy was educated on such, he was either daughter wrong is never completely understood the principles of physics. Perhaps he was trying to interpret Galileo's insight into relative motion (rather than relativity as stated in the book) but even so was done so incorrectly and this is offensive.

It is for these reasons that I gave the book one star. The author is by no means an expert and has no right to proclaim himself as so let alone publish a work such as this that completely misrepresents the man. I apologize if what I am saying is harsh however, I get slightly angered at people making money from lies.

I received this product for free in exchange for an honest unbiased review and if you read my review I think you can tell thats exactly what I did. I was in no way influenced to leave these opinions by anyone other than myself and by no means would I allow someone to influence my opinions for a mere discounted product.