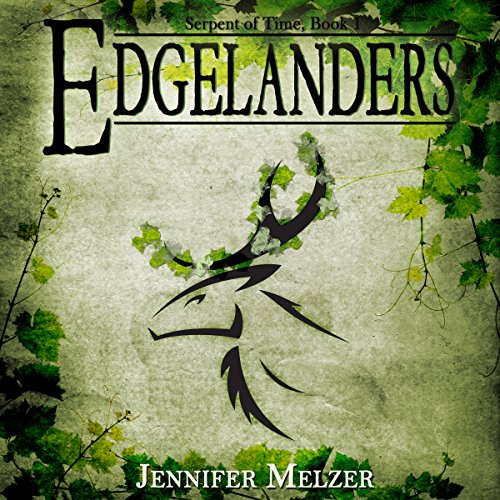 When Princess Lorelei of Leithe overhears her fiancé's plot to murder her on the way to their wedding, she does the only smart thing: she runs.

Into the Edgelands, the savage, woodland home of the legendary U'lfer, a race of fierce wolves who walk as men, she knows she is as good as dead, but she would rather be torn apart by werewolves than die by Trystay's hand.

A young U'lfer warrior named Finn catches her scent on the wind and finds himself possessed by an unnatural desire to shield and protect her from that which hunts her. From the moment he first sees her, Finn knows she is his. He feels her heartbeat, knows her soul, and he will do anything, even suffer exile from the Edgelands to be with her.

But there is more to Lorelei than meets the eye. She is like Finn; there is U'lfer blood in her veins, a beast beneath her skin she never knew was there. The answers she seeks lie south, in the frozen tundra of Rimian, where a village of people just like her have been waiting for Lorelei to come and save them since before she was even born.

What listeners say about Edgelanders

warning! this book has no ending

Would you try another book written by Jennifer Melzer or narrated by Veronica Giguere?

I love the voice narration of veronica Giguere, and I would most definitely listen to more books in which she narrates

the book was frustratingly slow , it spent 19 hours setting the story for an epic adventure which never happened, just when the story truly started to get rolling ,it stopped, this is clearly one long book dissected into at least 2 probably 3 smaller books, which is fine if you have a definitive start middle end to each of the books, this has a long and drawn out, sometimes repetitive start but no middle and definitely no end what so ever in sight I love long detailed books that are very descriptive and that last many hours and i regularly listen to books in excess of 40 hours, so length is not an issue, the most positive thing I could say is you clearly need all of the books available to listen to so you can follow the story through to its conclusion, unfortunately they are not available atm and it could be years before we get a conclusion to this adventure and im not sure its written well enough to be worth the wait .

The text focuses, in my mind, too heavily on interpersonal relationships and exposition of growing feelings and attitudes. I'd imagine this would work more in the context of big fans of the romance genre.

The world itself has a lot of potential. The tribalism and ritual of the U'lfer seemed interesting, exploring the realities of an animalistic people denied their traditional hunting lifestyle was interesting to chew on. There was just too much focus on the little details without enough chance to absorb the big picture first.

This book is in desperate need of an editor. 120 pages into the book we're still talking about the implications about the first dramatic scene in the Edgelands. The impending doom is delayed by every pair of characters hashing out how they feel about the event. The world is interesting and there seems to be some good ideas here, but the author bogs us down with character details we don't have nearly enough investment to care about! I'm patient, and the narrator of the audio book wss good enough to make me even more so, but this has turned into a slog and I just can't continue.

I am amazed that this series has not hit the best seller list. Happily, I feel I got in on the first wave even though the series has been on the market for awhile. I'm not quite sure how to describe the series except to say that Lord of the Rings, Game of Thrones & the Dresden Files marry.

There are Magicians, Shifters, Trolls, & other paranormal characters & a sort of history of the ancient Celtic people all rolled into one. It is mystical and draws you into the story line whether you want to be there or not. The series makes you feel empathetic toward each character and is explained from each POV so much that even the villains can draw your sympathy. I was only though 1/3 if the Edgelanders: Serpent of Time book when I sought out and purchased the 2nd book in the series, Sorrows Peak. Believe me, normally I don't do that! I wait until the end to see if there is a major mistake made by the author. Didn't happen!!!

The audio version of each of the first 2 books runs just over 19 hours ( over 550 pages) & each hour/page is total bliss. If you are looking forward to books full of blatant sexual encounters...you won't find it. However, there is romance and tons of adventure, intrigue and excitement. It was hard for me to put it down, turn it off to sleep or work. Nothing could get in the way of the books. That, to me, is the sign of a good book or series.

Both books had a solid 4 at Goodreads (which I found out by the time I was at the end of book 2). That rating only tells me that others (for their own reasons) enjoyed these books almost as much as I did.

So, if you have approximately 40 hours to invest in a great series & enjoy fantasy...I don't think you will be disappointed and will thank me for this recommendation.

By the end of chapter 1 you'll be mesmerized!

Book 2 just came out and book 1 was so good I'm re-listening again! Veronica Giguere is my favorite narrator so I originally took a chance on this novel and immediately fell in love. I've waited for the sequel and just discovered it's out, bought it and immediately downloaded book 1 again to re immerse myself in this magical universe before going on to book two...it's a pleasure all over again and I'm so excited to be back in this universe full of plot twists, intrigue. and special creatures.

in fantasy I think it's so important for the narrator to be able to captivate us readers and sweep us away...Veronica does just that, bringing this lovely story alive...along with a superb story this is a great combo!

I don't get the couple people who don't like Veronica... her pacing, personalities, voicings, and the emotions she imparts to each character are fantastic...she speeds up and slows down wonderfully, imparting a unique and realistic ambience to her stories. She lives every line and her dedication to the story...translating every line perfectly...is a tantamount to her genius as a narrator.

as to Felecia's review, i think it's ridiculous... a good fantasy takes time to develop it's characters and this it's done wonderfully; every chapter it's exciting and never loses flow.... Oh i just don't know where to begin... there are so many audio books I've found boring and predictable... I've listened to hundreds...and this id's one of the best

An underwhelming story with an average narrator

Would you try another book from Jennifer Melzer and/or Veronica Giguere?

This audio book is a waste of money. The premise sounds intriguing- werewolves, half wolf princess, adventure. However this book takes forever to go absolutely no where and is crippled by repetition.

Here is a summary of the book: princess finds werewolves, everyone she meets tells her repeatedly how special she is, that she's going to do great things, and that they've been waiting for her arrival their whole life, she leaves the first town and goes to a city, she gets told again that she's super special and will do great things, enter pointless love triangle that isn't intriguing because she has a rapey sort of soul bond with the very first werewolf she already met, end book one.

Oh, and in case you haven't figured it out, she's special. Not once does she do anything even remotely close to living up to her hype, but every character in the book will mention this fact multiple times.

If you get sick of reading about how awesome this princess is, the author is glad to distract you by letting you in on each characters thought process which is equally repetitive and consists of chewing on the same issues over and over and never evolving their character. If you ever forget what color a character's eyes are, don't worry, you will be reminded of their color every time they are mentioned along with a description of their full lips. The south is full of nothing but ogres, trolls, and goblins, which is another fact that you will beaten over the head with repeatedly. Oh, Guy A can't possibly live without Awesome Girl, because rapey soul bond.

There is also a weak and inexpertly executed debate about will of the gods vs. free will which is more cumbersome than productive. See, special girl is special because the gods made it so and she'll do great things whether she wants to or not.

My next listen will not be the second book in the series. Melzer could have really used a critical editor to get better pacing and an actual plot arc.

Would you listen to another book narrated by Veronica Giguere?

Veronica Giguere is an average narrator at best. Her default voice for girl under twenty is high pitched and obnoxious. Her default voice for young man is boy. If there's a child, take the appropriate aforementioned voice and increase its pitch and whine factor by 100. She has a tendency to insert overly dramatic breathing which is distracting. If there is a section she feels is suspenseful, she will increase her rate of speaking until it is difficult to understand. She has a tendency to mispronounce some words that break the immersion of the reader (eggsecute instead of execute, skythe instead of scythe).

If this book were a movie, it would be titled Boring Werewolves and it would be four hours long of people telling the main character she's special. Three hours would involve snow. Five minutes would involve werewolves actually being wolves. There would be a lot of walking, and a lot of talking. It would have maybe a minute or two of action.

Do not waste your money on this series, it's going no where very slowly. I am honestly quite baffled by the positive reviews this has elsewhere and think it's probably just a host of friends of the author bolstering her ratings.

Narrator puts me to sleep!

I want to finish this book ... I forgot that I am not a fan of this narrator ... even sped up, her voice just drones on and on

sad because the story intrigues me