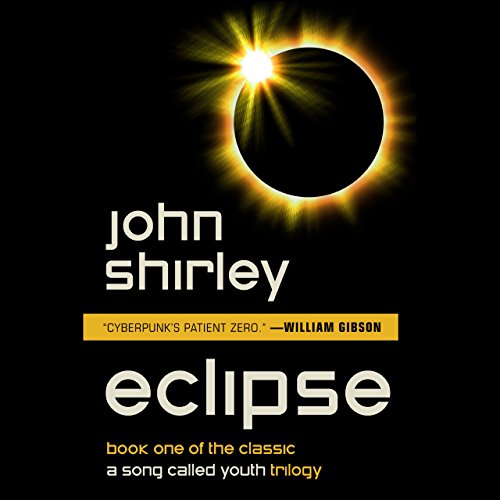 2039: The Russians didn't use the big nukes. The ongoing Third World War has left parts of Europe in ruins. Into the chaos steps the Second Alliance, a multinational eager to impose its own kind of New World Order. In the United States - in FirStep, the vast space colony and on the artificial island Freezone - the SA shoulders its way to power, spinning a dark web of media manipulation, propaganda, and infiltration. Only the New Resistance recognizes the SA for what it really is: a racist theocracy hiding a cult of eugenics. Enter Rick Rickenharp, a former rock'n'roll cult hero: a rock classicist out of place in Europe’s underground club scene, populated by wiredancers and minimonos - but destined to play a Song Called Youth that will shake the world.

What listeners say about Eclipse

John Shirley does an amazing job world building and his characters are very human and relatable. This is a grim world overrun by a fascist regime that has subversively taken over large portions of the world.
If you love cyber-punk (why else would you be here?) this is definitely a worthwhile read.

The only reason I gave this more than one star is bc I really liked the concept of the underground fascist secretly influencing the world to further their agenda. I was excited bc I thought this mirrored the current misinformation war going on today. I wish Shirley had done some more exploration of how ppl can easily be manipulated by racists who disguise their goals. But nope. All the characters are anti-fascist tough guys and the bad guys are literally Nazis.

One of the main protagonists of the story is named “Hard Eyes.” This character is so lame he’s unbearable. He’s in the war bc it’s “real” (Not much more than that as far as explanations go), he’s somehow an expert soldier without any training, and he tells ppl to “shut the fuck up” all the time. So basically he’s a white trash 12 year old’s idea of a tough guy.

Rickenharp, another protagonist, is only slightly more bearable. He’s a self righteous cyberpunk musical hipster. At least he started out interesting as he’s preparing for his final stage performance but quickly devolves into another Hard Eyes. He joins the revolution suddenly and almost without reason. It could have cool if he did it impulsively and then had to come to terms with the horrors of war. Nope. War is almost fun and you can be a hero.

The narrator has a nerdy nasally voice and when he curses, he sounds like he’s doing for the first time. That combined with the poorly written tough guy dialogue makes this audiobook painful to listen to.

I only finished the book bc I’m so desperate to find something new in the cyberpunk genre. I’ve read PKD and it’s great. I’ve read the classics like Neuromancer and Snow Crash which had some great concepts but are already so dated they don’t hold up as well. I loved Altered Carbon and even the sequels. I’d love some suggestions if anyone has found anything more relevant.