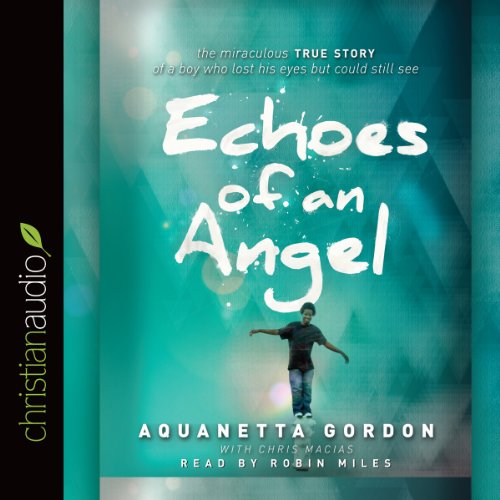 Echoes of an Angel

The Miraculous True Story of a Boy Who Lost His Eyes but Could Still See
By: Aquanetta Gordon, Chris Macias
Narrated by: Robin Miles
Length: 7 hrs and 23 mins
Categories: Biographies & Memoirs, Memoirs
5 out of 5 stars 5.0 (1 rating)

Echoes of an Angel

When Ben Underwood became blind at the age of two, anyone would have thought he faced a life full of hardship and uphill challenges - a world full of things he’d never be able to see and activities he’d never be able to enjoy. But as far as his mom, Aquanetta Gordon, was concerned, nothing was impossible for Ben . . . and so he accomplished the incredible. Known as “the boy who could see with sound,” Ben mastered human echolocation - the ability to detect the size, shape and location of objects through the reflection of sound waves.

By clicking his tongue and “seeing” the waves, Ben could ride his bike, shoot baskets, identify objects, and even play video games. Some called it a miracle, but to Ben and Aqua, the real miracles were the otherworldly experiences God gave Ben - physical and spiritual - that others couldn’t explain. Echoes of an Angel is the remarkable true story of how a child who seemed destined for darkness brought light to the world. It’s the story of a single mom who encouraged her son to push beyond his limits, even as her heart clenched with protective love and fear. And it’s the story of a family’s unshakable faith . . . in God and each other.

Has Echoes of an Angel turned you off from other books in this genre?

I will never listen to another christian audio book. Readers can draw inferences and make conclusions. Everything was spelled out and only one side was shown. Some parts were so obviously one sided and unbelievable.

I read it because I was interested in Echo Location. Unfortunately that was only about 1/4 of the book.