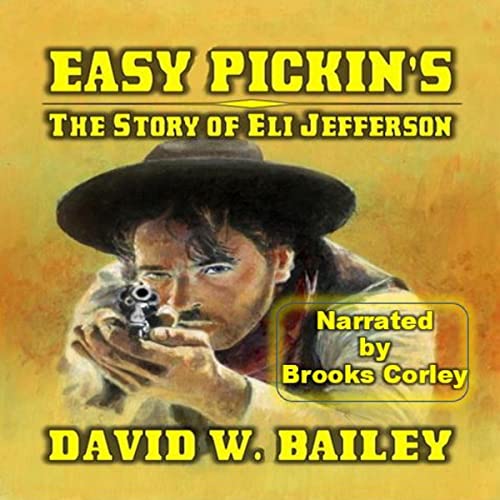 Eli Jefferson left his home in Sweetwater, Texas, intent on doing as a good son should, and helping to raise the money his father needed to pay the upcoming bank note. After finishing a cattle drive and earning the money needed, Eli set out for home, ecstatic. As he neared home, Eli was bushwhacked by an unknown gunman. The bullet creased his head and left him with amnesia. With no memory of who he was, he stumbled unknowingly on the burned remnants of his family’s ranch. His mother and father had both been brutally murdered, and the cattle stolen.

Befriended by a group of men who’d found and helped him, along with a few he’d met on the drive, Eli and his friends form a "posse" in search of clues to the murders and burnings of ranchers and their homes in the surrounding area. Together with the sheriff and his deputy, they rush to end the string of violence and the men causing it.

What listeners say about Easy Pickin's

I’m a big fan or westerns and I stumbled upon this author and have listened to all his books. I especially like the action,adventure & descriptive writing. Brooks Corley also does a great job to add a special touch to the book.

This is a great western. Eli goes on a cattle drive trying to make some extra money to help his family. While he is gone his family gets killed and when he comes home he gets shot and looses his memory. Eli goes on a mission to find out who did it. I liked how his friends comes to help him. Eli has a way of making friends. This book is full of adventure and action. The sheriff got on my nerves he could of done more he's not a bad sheriff it's just I thought he could of done more to catch the guy that was behind everything. This is the best book I have listened to in a long time. Brooks Corley does a great job narrating this book. He has the perfect western voice. If this review is any help will you please click on the helpful link below. Thank you.