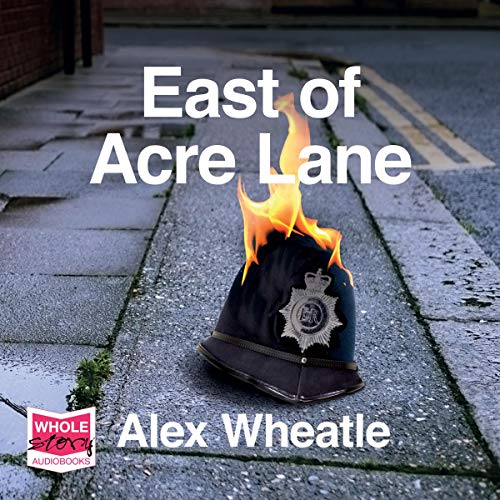 By: Alex Wheatle
Narrated by: Bernard Mensah
Try for £0.00

East of Acre Lane is the fast-paced and razor sharp story of a young man trying to do the right thing and establishes Alex Wheatle as the exciting new voice of the urban experience.

When East of Acre Lane was first published in 2001, Alex Wheatle instantly became one of the key commentators on contemporary Black culture and was featured in BBC news, radio, numerous papers and Channel 4. The BBC have already optioned East of Acre Lane to be made into a film.

Set in 1981, the year of the Brixton riots, the novel is a gripping thriller in a society on the edge of explosion. Wheatle focuses on Biscuit and his posse as a way to introduce the whole community. Biscuit lives with his mother, brother and sister. He helps out by hustling on the frontline for the South London badman, Nunchaks. He doesn’t want to be doing this for the rest of his life, but it’s difficult to get out of the trap.

As the patience of the community breaks and the riots begin to erupt, Biscuit has to make a choice that could change his life forever.

"Alex Wheatle writes from a place of honesty and passion." (Steve McQueen)

"Alex Wheatle's second novel is a rhythmic, fast-talking tour of the tower blocks of South London. The strength of the novel lies in the characters who form Biscuit's posse...writing in a street slang that reads like an urgent urban poetry, Wheatle catches the dialogue of the friends and contrasts it with passages of distilled description. He observes meticulously the subcultures within the black community.... It is this blend of frantic action and thoughtful writing that ranks Alex Wheatle alongside Courttia Newland as one of the most exciting writers of the black urban experience." (The Times)

"In East of Acre Lane Alex Wheatle has managed far more than simply pulling off a fast, punchy morality tale centring on a young man's dilemma about going straight or opting for a life of crime.... Action packed, funny and filled with cocky banter between its teenage male characters, references to reggae music and street stye.... Wheatle has written a hardhitting novel which is an incendiary reminder of one of the most explosive events in London's post war history." (Big Issue)

What listeners say about East of Acre Lane

got my night owl award listening all night.. Fab

A great book, based on black youts real experiences of the 80s thaterite era & police racism, set against a backdrop of romance, some laughs, and the characters all came to life with the great narration. by. Bernard. Mensah. The voice is important on audibles, for me has to reflect the subject. So great narration.. This made into a film would be an unmissable for me

the Romantic Ballad of the Brixton Riot