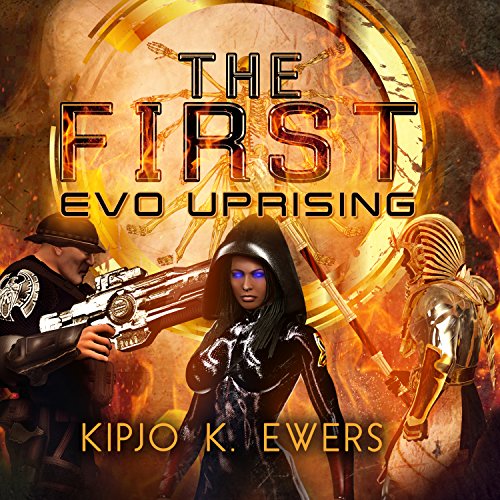 Seven years after the Judgment virus, also known as the EVO virus, infected the planet, a portion of the Earth's population of humans has died while another portion received powers and abilities. Superhumans now walk the Earth. Some use their abilities for good, taking up the mantle of heroes, while others become villains. The rest join and form superhuman military units within their respective countries, building toward another possible Cold War.

Sophia Dennison, the first and most powerful superhuman on the planet, who inadvertently changed the world, is unable to fit in with the race she was once a part of and unwilling to embrace the race she created. Living a life of semi-isolation, she uses her power and abilities to help people as she sees fit, taking no mantle. However, a new threat to the planet will force her toconfront not only several spectrums of her past but ultimately her destiny.

What listeners say about EVO Uprising

What does Carla Mercer-Meyer bring to the story that you wouldn’t experience if you had only read the book?

NO THIS BOOK IS LONG SO NO IT TOOK LISTENING TO IT AT WORK AND HOME AND ANY WERE ELSE I WENT. IT TOOK NEARLY 6 DAYS TO LISTEN TO

Love this feminist perspective of a superhero

The first book was ok as it had a lot of cliches in the plot and dialogue. I still enjoyed it and was hoping the second book would cover new ground and it did. The narrator was very good and the story was entertaining and absorbing. I look forward to a third book.

I can see the world evolving in the manner Kipjo describes it. Carla gave a wonderful performance. I hope there is another installment to the series. Keep evolving!

I must say I did not believe that they could get any better than the first book. The first book was awesome I thought it was an incredible story I love the characters I loved everything about the first book. However after reading the second book I felt that this book actually might be a little better if not it's just as good. Bravo

Dont know why I waited so long

The author uniquely references certain songs in the story, and when I listened to the songs while reading the book it really pulled me into the story. The author also throws in references to different anime that only anime fans will get.

Which character – as performed by Carla Mercer-Meyer – was your favorite?

A must for all anime fans, and on par with any of the Marvel movies

I love the premise in this series and especially love the main character, who is equal parts strong, clever, and sassy. The story got off the rails a few times with the introduction of a great deal more characters. However, by the end it all wrapped up nicely and I'll be looking forward to book 3.

Not recommeded to buy.

What disappointed you about EVO Uprising?

There were too many language glitches in the book. The word exponential is used wrong with many other words.

What could Kipjo K. Ewers have done to make this a more enjoyable book for you?

Not give his characters infinite power abilities.

Which character – as performed by Carla Mercer-Meyer – was your favorite?

Carla Mercer-Meyer did fine with the material she had.

Very little I had to force myself to finish it.

He seriously needs to have someone proofread his work. Also I am not pleased with this limited form of review. It's difficult to express yourself in less than 15 words. Obviously you don't want to have any bad reviews on your site.

why can't I get this series on audible anymore? is my money not good enough 😕

Loved it, upgrade from #1

What made the experience of listening to EVO Uprising the most enjoyable?

The reader did a great job, the story was engaging, some of the characters had depth and the main star (Sophia) had some very real emotional logic.

What other book might you compare EVO Uprising to and why?

SHE did well in mixing her inflections and "voices" between the characters to pull it off well. Sometimes the editing forced her sentances to almost overlap. Not so bad in book #2, but #1 it was noticable.

If you do a #3, please stop elevating the characters (Sophia and #3) power without end. I get it that they get stronger to avoid being hurt the same way twice, but even physics has it's limits when you have a pissed off woman destroying moons, basking in Mercury-distance sunlight and eating nukes.

Too much liberal BS.

You know it's bad when you don't even care how it ends. I skipped the last two chapters. I would rather live in the crap world we have now than one under the liberal goddess. I do not mean to critique the writer's talent, I liked the first book quite a bit. I mean if you are cruising around in your Prius, wearing a Che Guevara shirt and sporting the "Feel the Bern" or "I love Hillary" bumper sticker, you will have no problem with the utopia queen. But to all the sane people out there, don't say I didn't worn you.

strong female God fearing character helping the world get back on the right path. Then you went and threw in super powers and anime references. Now we more then cool I'm buying the entire series and waiting for more.