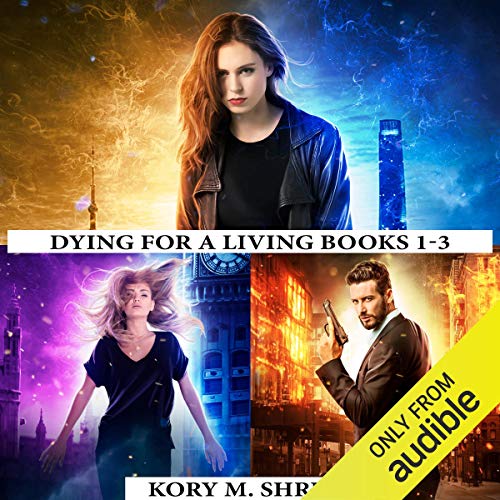 This box set includes the first three novels in the Jesse Sullivan series: award-winning novel, Dying for a Living, Amazon best seller, Dying by the Hour, and their companion novel, Dying for Her.

On the morning before her 67th death, it is business as usual for agent Jesse Sullivan: meet with the mortician, counsel soon-to-be-dead clients, and have coffee while reading the latest regeneration theory. Jesse dies for a living, literally. Because of a neurological disorder, she is one of the population's rare 2 percent who can serve as a death surrogate, dying so others don't have to.

Although each death replacement is different, the result is the same: a life is saved, and Jesse resurrects days later with sore muscles, new scars, and another hole in her memory. But when Jesse is murdered and becomes the sole suspect in a federal investigation, more than her freedom and sanity are at stake. She must catch the killer herself - or die trying.

And that was only the beginning....

I found the story really interesting and really liked books 1 and 2. Book 3 on the other hand was essentially the whole story again, but through the eyes of another character with a little bit of a backstory. And the story didn't progress in any way in book 3. I find these sort of books in a series extremely frustrating.

I found the actual story very interesting and tried my very best to get past the horrendous narrator but I just couldn't. Audio books are supposed to be relaxing but I just got more and more wound up by the narrator! Most male characters (and a few female ones too) spoke the same soft, irritatingly slow, sardonic voice, most female characters spoke in a nasely, whingy, whine (including the heroine, at times) and it totally ruined the story. I'm going to have to read the actual books instead because I really want to know what happens! If I were the author I'd be very upset at what's been done with my book!

This book has it's interesting bits but it's just so boring! The idea is good but man oh man, the story is not gripping, I had no interest in the characters, even the exciting parts were boring because everything is so over analysed and drawn out.

I finished the first book and most of the second and didn't enjoy one bit of it. When I was dreading to go back to listening I just abandoned it and will not finish.

was a good intro to the series. but I suspect all the action is to follow

Jesse feels just like a real person, despite the fact that she's technically a Zombie but you shouldn't use the Z-word unless you're one too and you're trying to reclaim it. She's truly funny, knows the right amount of information to make the plot twist and turn, and her cast of supporting characters are varied and interesting too. I was concerned about the presence of a love-triangle (even if it is a bisexual love-triangle). However, it is different from the 'young-adult love-triangle' trope as these characters seem like they are largely just getting on with things, like I've witnessed with love-triangles in real-life.

It's set in Nashville and the town feels as part of the novel as the characters. Give the first book a chance passed the first few awkward descriptions - the author gets better at integrating new characters and there is a noticeable step up in quality between books 1 and 2.

Saying that the descriptions of sex-crimes (mainly in book 2) are horrifying... I mean they are describing horrifying crimes so they shouldn't be anything else, but I decided to fast forward through the end of those minutes. I don't think I missed anything plot-wise (if you decide to do this too). I already had boundless sympathy for Jesse's vaguely described childhood horrors, without re-living them with her. The vivid descriptions of institutionalized torture are also in this category.

This is not a light-novel despite zipping through the plot in pacy and entertaining way. If anything, although I am invested in the story, I am holding back from the next novel in the series because it's hard-work in these parts. Still I think more novels should be about people like Jesse and I think the satirical elements don't seem too forced.

Good for fans of Jessica Jones (Marvel); similarly adult themes, but set in a vibrantly new world with a wildly different protagonist even if they do share a name!

I wish I knew the was a Lesbian love story. I had a hard time getting into the main characters head. The “I have a boyfriend I adore but I want to sleep with my best friend” was super annoying. The narrator was awesome! The storyline suspenseful. Overall a good listen. But I am just not into same sex love stories. I was totally unprepared for this storyline. I reread preview there is nothing that said it was this kind of story.

They Chose the Wrong Narrator

The story and characters are decent, but the performance by the narrator lacks any intensity. I can only compare the Audible of this book to the fluffiest feel-good part of a Hallmark film.
The meter and inflection of this narrator would be good for childrens' books where nothing bad happens and everything is bunny rabbits and pretty clouds.
But for this kind of book, the syrupy sweet sameness of the performance and the long pauses between EVERY sentence turns this story into a sleepy-time snoozefest.

Maybe, if the series continues for years to come and I find myself forgetting the story.

I don't know, I usualy don't listen to stuff like this...

What does Hollie Jackson bring to the story that you wouldn’t experience if you just read the book?

i die for you to live

I usually don't listen to this kind of audiobooks, not my genre at all, but I gave a chance to this trilogy by Korry M. Shrum and I was really happy to discover a very well written series, with likable characters and a good an original plot. This is not your usually dumb zombie story, not at all...

Jess is annoying AF. I'm trying to get through this book without wanting to choke her.

I don't know how to explain it. I am a paranormal book lover but I just couldn't get through this one. I can't put my finger on it. just couldn't finish it.

The first two books were amazing however the third book jumped between years with a lot of flashbacks. Was not my favorite thing to listen to, would have been less confusing if I had a book I could flip back to see the year

Get To The Point!

I was excited for what this story could have been. This story never really got to the point. It just drug on and on with the commentary between Jesse and Abby. I listened though 4 books and started Volume 2 where it was just more of the same drugery. This book needs a rewrite. It has all the potential elements to be a really good story and possibly a movie, but it just did not deliver. . . .Sorry. . . Don't waste your time on this book.

She ain't no Patricia Briggs!

I enjoy adventure stories written by female writers. They offer a different perspective to things, that is often interesting and informative. But then there are those writers that get lost in the endless verbiage, the monological mutterings that is a cognitive morass for those like me that want more than unending emotional introspection. If you enjoy this kind of unremitting emotionalism, which I am sure has a place somewhere in modern literature, then this book is for you.

Unique take on the dead coming back!

Wow, this is such an incredible premise for a story! Death replacement agents! Someone who dies in the persons place. First, A person pays a special psychic and they do a study of the person they are paid to check on. Then the psychic determines how that person will die and when. They then hire a rare Death Replacement Agent and they follow them all day until the time they need to step in. All the technical issues are described in the book. This world is not quite like ours but still has the prejudices and it comes in play against anyone with this gift.

In book 1, Jesse is the main character, and she is one of these agents. She is almost killed for good when someone sets her up. The rest of the book not only gives the reader a clue about society and the Church's view about bringing back the dead but the threats against the people with the gift. The book also lets us know what it's like from the agents point of view. The characters are introduced, they are all very well developed and interesting. Book 1 looks for who is behind Jesse's murder attempt. 5 star book!

Book 2, many agents go missing and some of the people the agents have saved also are missing. Jesse and friends try to find out what is going on since they are on the list to disappear. More information about the characters and Jesse's background is exposed to the reader too. So many great characters in here and the interactions are emotional and engaging. The powers Jesse and her other friend that's an agent is growing. 5 star book!

Book 3, this book is more about Brinkley who is Jesse's boss. He is the one who got her into the field of being a replacement agent. It bounces back and forth from present to his past memories and back. The reason is that he knows he is going to die. It's a touching book and painful due to what he saw and experienced. 4 star book!

The books are incredibly, a unique take on dead coming back to life, prejudices, a fun and heartwarming fantasy, lots of suspense and scary situations, friendships, and what to do with your life.

The narration was good! I never once thought about the narration. When the narrator makes a mistake, it's obvious so no narrator wants you to remember its not real people. To me, I really got into it and they seemed like real people! 5 stars for the narrator!

Great read! page turner for sure!!

I loves the beginning of this series. im excited to start the next book! Definately a different theme and very interesting!