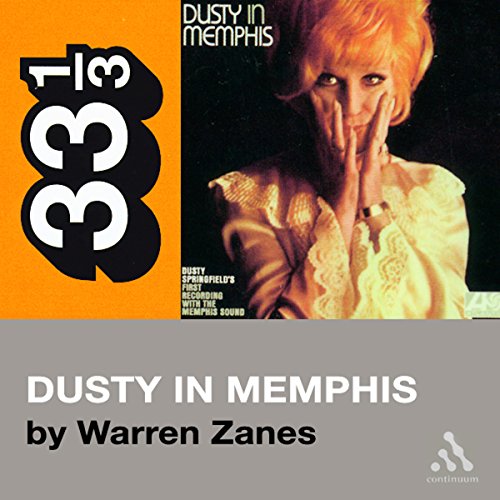 Warren Zanes, himself a musician, says off the bat that his entry into Continuum's 33 1/3 series is "not a book about a record", but "a book about an experience with a record." Zanes describes the effect of Dust Springfield's Dusty in Memphis, its complex view on love's mysteries and contradictions. Toward this goal he analyzes the album, and interviews some of the key players in its creation, like Jerry Wexler, one of the producers. Jay Snyder's authoritative, flowing voice, pushes along this audiobook that'll have you running back to the source material, an album that instantly puts the listener into an environment, perhaps of their own memory or the smoky world of pop R&B hits like "Son of a Preacher Man".

Dusty in Memphis, Dusty Springfield's beautiful and bizarre magnum opus, remains as fine a hybrid of pop and rhythm and blues as has ever been made.

In this book, Zanes explores his own love affair with the record. He digs deep into the album's Memphis roots and talks to several of the key characters who were involved in its creation; many of whom were - like Zanes - outsiders drawn to the American South and mesmerized by its hold over the imagination.

Miss with the Blues

Dusty was never Rusty. How could an artist with so much talent ever be overlooked in the Pantheon of great entertainers. Her life was filled with sorrow but she filled the world's music with great interpretations of classic melody.

No white woman has ever achieved the accolades showered on her by people who she emulated in the world of Soul.

A personal look at an excellent album

Warren Zanes gives us a personal look at his history with this acclaimed Dusty Springfield album, as well as the details of its creation. Dusty in Memphis is sort of an improbable classic, made by a singer whose personal problems were overcome by the strength of the material and by the collaborators she chose, such as soul music producer extarordinaire Jerry Wexler. Northerner Zanes details his fascination with the mysteries of the exotic South, a fascination shared by British soul singer Springfield, who traveled to Memphis to try to capture the spirit of soul music at its source.

Well-written but not enough album-related info

Warren Zanes is a very good writer. I loved his Tom Petty bio, his narrative is always compelling. That said, this book really serves as an essay about the mythical South rather than a true telling of the making of Dusty in Memphis. There are some cool details but they are interjected sparsely between long expositions about race, southern culture and the history of people who've profited from the work of southern black musicians.

All of those things make sense to talk about and Zanes does so beautifully. But I found myself wanting to know more about the actual album featured in the title of the book.