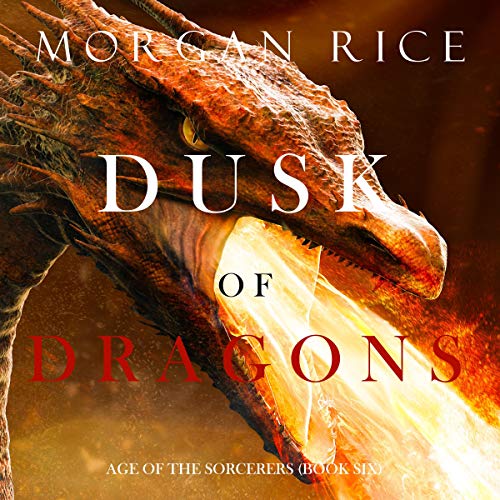 By: Morgan Rice
Narrated by: Kevin Green
Try for £0.00

From number one best seller Morgan Rice, author of A Quest of Heroes (over 1,300 five star reviews), comes a startlingly new fantasy series. Dusk of Dragons is book six in best-selling author Morgan Rice’s new epic fantasy series, Age of the Sorcerers, which begins with book one (Throne of Dragons), a number one best seller with dozens of five-star reviews.

In Dusk of Dragons (Age of the Sorcerers, book six), the many story lines and characters finally converge in a complex and epic battle for the very future of the capital and the kingdom.

Lenore leads her army for the capital, determined to avenge her mother and take it back from King Ravin. Devin, Renard, Erin, and Greave all lead their own personal battles. Inside the gates, Aurelle and others aid the cause. And Grey oversees it all.

What follows is shocking and unexpected, with a series of twists that turn heroes into villains and villains into heroes in the fog of war.

But after a shocking twist that no one could have expected, even all of their efforts may not be enough.

Will the kingdom survive?

Age of the Sorcerers weaves an epic saga of love, of passion, of sibling rivalry, of rogues and hidden treasure, of monks and warriors, of honor and glory, and of betrayal, fate, and destiny. It is a tale you will not put down until the early hours, one that will transport you to another world and have you fall in in love with characters you will never forget. It appeals to all ages and genders.

What listeners say about Dusk of Dragons

A series that keeps giving, love the strong female characters and heroines and the added humour x