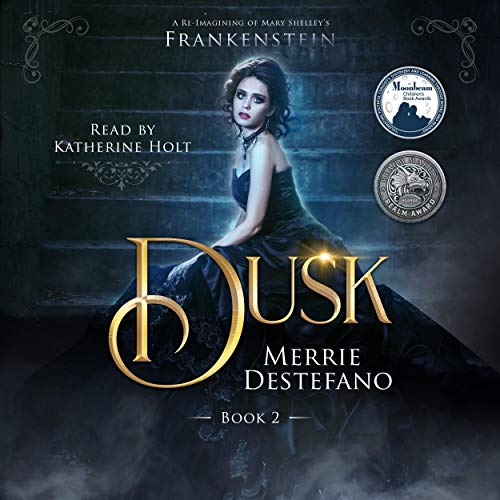 A holiday in Switzerland is supposed to lift Mary Wollstonecroft Godwin’s spirits. She wants to forget the past and have fun. In fact, everyone in her party is running away from one indiscretion or another — from her fiancé Percy Shelley to Lord Byron to Mary’s stepsister, Claire. But from the moment Mary arrives at Byron’s villa, she knows something is wrong.

He rushes her indoors and forbids all of them to go out at night, claiming that the horrible weather has driven wild animals down from the mountains. The only person who doesn’t seem to be running away from anything is a handsome, young Italian doctor, John Polidori. Instead, he is fervently pursuing local folk legends and a new scientific theory that claims people can be raised from the dead. But it’s not until they all challenge one other to write ghost stories that the real danger begins.

In a nightmare, Mary envisions a patchwork man animated by Galvanism and she begins writing Frankenstein. Likewise, fueled by local legends, John writes The Vampyre — one of the first vampire stories ever written. What neither one of them knows is that they are conjuring a dark evil. Before long, all of their lives will be in danger — for neither of these characters are imaginary. Far from it.

What listeners say about Dusk: A Re-Imagining of Mary Shelley's Frankenstein

I thought book 1 ending on an exciting note. Book 2 picks up where it left off and takes off like a galloping horse! What an great story. Merrie has a way with words, making it easy to picture the scene, the action and (shudders) the creatures. This trilogy might be "Award-winning fiction for teens", but adults will certainly like it too. Chilling, exciting, on the edge of your seat story telling. I love it!

Definitely set aside this sequel for a nice drive or a long walk. So addicting. It's impossible not to get lost in this dark icy world. Love, love, love it so much!!! Rich and delicious and I'm DYING to listen to Part Three!!

I like this as much as the previous part. It's on par with the previous entry. Look forward to the next part.

If you thought things couldn’t get worse for this fictional version of Mary Wollstonecraft Godwin, you’d be wrong. Vampires! Werewolves? Patchwork Man! Romance and lusty desires in the midst of crisis! The old ways prove true and new discoveries change the odds and the stakes. Merrie DeStefano manages to double down on the horrors and mystery presented in the first portion of the saga of the year without a summer. More scares, more consequences. And a twist you might have seen coming, but which forever alters the course of Mary’s life. And may shorten it as well?! Katherine Holt delivers an excellent performance of DeStefano’s chilling second part of the reimagining of the origins of Frankenstein. And I can’t wait to hear how it all ends!

When your favorite book is paired with the greatest voice a reader could have hoped for, magic happens. This series is just that. Magically darkly delicious. Destefano’s story comes to life through Katherine Holt’s velvety voice in Dusk, the second installment of the Shade series. I highly recommend listening!

This is the second book of three. please go back and listen to Shade first for the full experience. I have to emphasize again, this book does not hold up well on it's own. This trilogy is very much one story split into three parts. So please do read them in order. On that note though, I do enjoy the fact that these books are short and can be finished in a day or two. Dusk sees Mary Shelly well into the writing of her famous novel while trapped inside someone else's. Vampires have come to Geneva and her beloved Percy seems to have become one of them. As someone who enjoys history this plot interested me. As the years are wrong for Shelly's death. So how will she save him? Or is the author going full alt history? I am anxiously awaiting the release of the last audiobook in this series. Once again Katherine Holt lends her haunting voice to this audio performance. She manages to perfectly capture the character of Mary Shelly as well as adds to the atmosphere of the narrative. *I was given a free reviewer code. my opinions are my own and are provided honestly.*