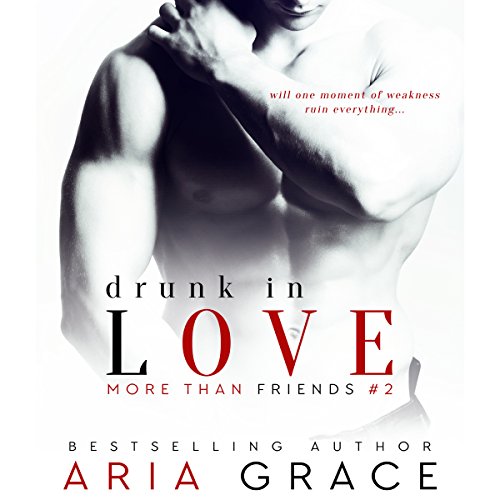 The long awaited sequel to More than Friends.

Zach and Ryan have a good thing going. After eight blissful months together, they're both ready to take their relationship to the next level. When a romantic weekend away turns into a wild night with Zach's ex, things change forever. An experience they thought they could handle could break them up for good. For mature listeners.

What listeners say about Drunk in Love: More than Friends, Book 2

Like book 1, I’ve read this one several times. And it’s a good short story. But no matter how many times I have read this, and now heard this story. My Heart just Hurts and breaks for how Selfish Steve is doing his part in the damage to Zach & Ryan’s relationship. Uugghh. I just get so upset every damn time, even though you can see what’s about to happen from a mile away. Damn it.
I will say that I think the Narration for this book 2 was better than the first book. I felt the narrator put a little more effort and emotion into this one.

A little sad, a lot of sexy!

Yes. It's a very well written story with decent narration that will have you on the edge of your seat.

What was one of the most memorable moments of Drunk in Love: More than Friends, Book 2?

The very end, on the beach.

What does Douglas Dale bring to the story that you wouldn’t experience if you just read the book?

He really did a good job of capturing Ryan's pain.

If you could rename Drunk in Love: More than Friends, Book 2, what would you call it?

This story picks up several months after the first installment in this series with Zach and Ryan growing more comfortable with their relationship. Zach has pretty much fully embraced his new status as a gay man that is in a committed relationship with another man. He has yet to tell his parents about Ryan though, that part he avoids like the plague. These two guys are both young though and with that is an expected level of immaturity, as well Zach has only ever been with Ryan. While they know they love each other, when the opportunity presents itself to explore something a bit more risque, they stupidly agree.

Now they are at odds over a mistake that each of them thought they wanted, thought they both wanted and perhaps in the moment they did. But when the mood shifted, communication would have stopped things from escalating. They are young and still learning their way as a couple though. The question is, can they work this problem and find their way back to each other?

Holy christ but the this book had me on the edge of my seat! It's super short and sexy and heart breaking and real, it's a lot of emotion and content for just a two hour listen. I was so engrossed in this story that I literally screamed at my i-pod when I reached the end. NO! I need to know what happens next, like now! The ins and outs of the relationship between Zach and Ryan continues to amaze me, how they grow closer and more committed, and then how they are still human and make stupid mistakes like everyone else. While Dale is not my favorite narrator he did an amazing job of capturing Ryan's pain in the aftermath of the mistake. My heart was breaking for these guys as Dale told me their story.

​So well written for so few words. I think Grace does an amazing job of getting as much content as possible into the few pages she has to work with. The story flows well, the situations these guys are faced with and their reactions are realistic and the character development is perfect. Definitely a must read, or listen, series if you like stories that are based in reality with flawed characters that are so in love, you can't help but root for them to find their happy ending. ​

Ok - When I listened to the firsts book, I didn’t realize it was a series...just thought it was a novella. I wasn’t impressed with writing or narration, but did enjoy the storyline. I was happy to see there were follow-up books, but wary that they wouldn’t be deeper than the first book that felt kind of shallow. I was very pleasantly surprised to really enjoy this. Ok and get much deeper feelings from the two leading characters than I had during first book. I’m so glad this story continues.

bad decisions, break up, reunion. this is a perfect example of misunderstandings and poor decisions. the ending was sweet.

Plot that can be fixed with one conversation...

Shame. The first one was so promising. A lot of lazy writing and a very rushed ending.

Least favorite of the first 4 books...

This book was a struggle. Bad decisions and assumptions were made continually throughout became frustrating. I was annoyed with all 3 of them. Ive already read Steve and Joey’s story, and it is 100 times better than this one. I won’t read this book again.

More from Zach and Ryan

What did you love best about Drunk in Love: More than Friends, Book 2?

I think it was a nice peek into what happens after happily ever after for Zach and Ryan. I think it also went a little further in depth into the emotional places the two bounce around in

I'm not sure I had a favorite but I think both characters learned a lot from the preconceptions they had about what relationships are, regardless of the sex of your partner.

I really enjoyed the scenes that perhaps weren't action packed but gave you a better glimpse into the characters than I felt we got in the first book.

I have read the entire More Than Friends series and absolutely love them all! I was very excited to find out that the author was making them available in audiobook! Drunk in Love picks up several months after the first book ends. Ryan and Zach find their budding love tested as new interests and an encounter with Zach's ex may push the two past their limits. Aria writes a wonderful story of love and the complications that come along with it. This is a great set for lovers of m/m romance.

The narration was good, but not perfect. I would have enjoyed listening a little bit more if the narrator had made attempts to change some of the various characters voices and become more engaged with the dialogue. However, this did not detract from the story and it was still an enjoyable read. If you liked the first book in the series, I'm sure you will enjoy this one as well! 4.5 stars!