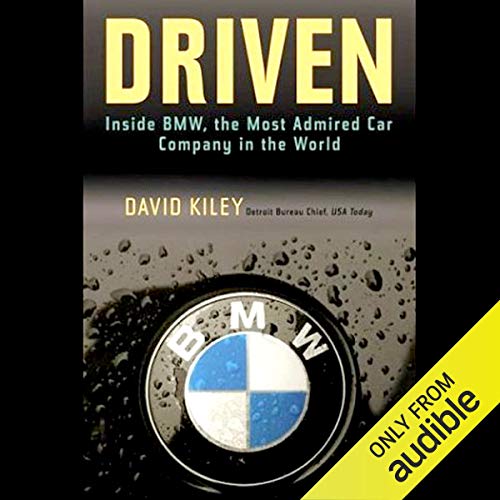 Inside BMW, the Most Admired Car Company in the World
By: David Kiley
Narrated by: Jay Snyder
Length: 13 hrs and 36 mins
Categories: Biographies & Memoirs, Business Leaders
3 out of 5 stars 3.2 (5 ratings)

Here is an exclusive look at one of the world's most successful and controversial companies, and the mysterious family behind it.

BMW is arguably the most admired carmaker in the world. It's financial performance is the envy of its competitors, and BMW products inspire near-fanatical loyalty. While many carmakers struggle with falling sales, profits and market share, demand for BMWs continues to grow, frequently outpacing production.

Now, David Kiley, Detroit bureau chief at USA Today and author of Getting the Bugs Out, which covered Volkswagen's demise and rebirth, goes inside the fabled German automaker to see how it does what it does so well. With unprecedented access to BMW executives, Kiley goes behind the walls of BMW's famed "Four Cylinders" headquarters in Munich at a time when the company is in its most aggressive, and some say riskiest, expansion in its history, and when some of the company's new products, like the 7 Series sedan and Z4 roadster, are for the first time drawing as many barbs from critics as bouquets.

Kiley covers intimate details of the boardroom drama surrounding the company's nearly disastrous acquisition and subsequent sale of the British Rover Group and its expansion into selling MINI and Rolls Royce cars.

Besides being a world-class carmaker, BMW is also considered one of the smartest consumer marketing companies and Kiley explores the extraordinary value and management of the BMW brand mystique. He also takes a revealing look at the mysterious and ultra-private Quandt family of Bad Homburg Germany, which owns a controlling stake in BMW: Johanna and Susanne Quandt, two of the wealthiest women in Europe, and Stefan Quandt, one of the wealthiest bachelors on the continent.

"David Kiley does an excellent and timely job of exploring what has been right about BMW and asking the right questions about whether it will continue to lead the industry in brand and product focus and excellence. A fascinating read." (Bob Lutz, Vice Chairman, General Motors)
"David Kiley has captured the unique DNA of BMW and presents it in a straightforward and readable manner. He gets at the essence of the BMW brand and what makes it tick." (J. D. "Dave" Power lll, Founder, J. D. Power and Associates)

A fantastic read for those interested in both history and brand.

I loved the overall accounting of the history of the company, with its ups and its downs. I thought the chapter about Magda could have been left out entirely, summed up in one line, but I still believe that the rest of the book was great. I loved the remarks regarding brand, culture, and the talk about what it is that makes the cars so desirable. I’d recommend this to anyone who likes history, business, marketing and psychology, or cars. It’s got something for everyone.

Interesting to listen to these days, there are predictions about BMW's and the automotive industries future in the book. I found it interesting to see how it has actually played out. Has a lot of peripheral information about people and events related to BMW that maybe go a little too far off BMW but still an interesting listen.

A syncophantic take on history

The book is written from the perspective of somebody who has drunken all the BMW-coolaide on the planet. Rather than present the history of BMW and allow the reader to make their own judgements on the things the company did right and wrong, the author presents the history as a brand-that-is-always-perfect lauding praise on their every move and only briefly mentioning period criticisms of various models.

This was a difficult for me. It starts as a long and painful advertisement for BMW. At the point I nearly stopped reading the book shifted gears and started to get into the subject matter of the inner workings of BMW.

The book did a fair job speaking to the subject matter. There were details about the ownership, a small treatment of the history of BMW, a short deviation into the World War Two history of BMW, and even some intimate details about the personalities that own, run and contribute to BMW’s success. Mr. Kiley did an excellent job of making sure the readers understood how highly he holds BMW.

The book is constantly punctuated with what sounds like a BMW sponsored advertisement. I got the feeling that BMW must have underwritten the book, because there is heavy on the accolades that I was at my limit of reading tolerance.

This book is truly a disappointment to me. I had so much hope for learning about BMW, and I received only superficial tidbits of what the book title promises. I think the worst part is that the book is dated by the constant advertisements and so much of it isn't even relevant now. If it weren't for the fact that I am such a BMW fan I would not have been able to finish the book.

Would you try another book from David Kiley and/or Jay Snyder?

Would you be willing to try another book from David Kiley? Why or why not?

Have you listened to any of Jay Snyder’s other performances before? How does this one compare?

If you own a BMW or love their cars, you should listen to this book. It's little dated. But it does a good job of telling the story of how BMW rose to become "The Ultimate Driving Machine", it's poor decision buy with Rover brand, better decision to buy the Mini Cooper brand and Rolls name, and the resulting company from. It recently bought a bimmer, so it gave me a little insight into the history of the my car.

I own a BMW. I have owned several other BMW's. I think they are exciting to drive and built well. This book is not exciting. The history starts well into the body of the book, where I thing it should start at the beginning. The reader is good, but this corporate account of most all of the BMW's since inception comes off as a company production. Interesting but not compelling reading.