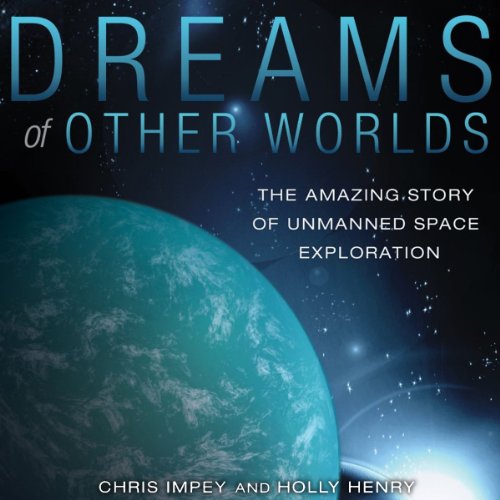 Dreams of Other Worlds

By: Chris Impey,Holly Henry
Narrated by: Matthew Josdal
Try for £0.00

Dreams of Other Worlds describes the unmanned space missions that have opened new windows on distant worlds. Spanning four decades of dramatic advances in astronomy and planetary science, this book tells the story of eleven iconic exploratory missions and how they have fundamentally transformed our scientific and cultural perspectives on the universe and our place in it.

The journey begins with the Viking and Mars Exploration Rover missions to Mars, which paint a startling picture of a planet at the cusp of habitability. It then moves into the realm of the gas giants with the Voyager probes and Cassini's ongoing exploration of the moons of Saturn. The Stardust probe's dramatic round-trip encounter with a comet is brought vividly to life, as are the SOHO and Hipparcos missions to study the Sun and Milky Way. This stunningly illustrated book also explores how our view of the universe has been brought into sharp focus by NASA's great observatories--Spitzer, Chandra, and Hubble--and how the WMAP mission has provided rare glimpses of the dawn of creation.

Dreams of Other Worlds reveals how these unmanned exploratory missions have redefined what it means to be the temporary tenants of a small planet in a vast cosmos.

What listeners say about Dreams of Other Worlds

It didn't need to be so long

Whilst the book covers all the interesting missions promised in the title, the authors clearly felt this wasn't enough. For some reason they had to make the book longer and have done so by apparently padding it with many, distracting and long-winded digressions. These range from lengthy explanations of the background science in each story to long essays on the cultural associations of the subjects of the book. In one chapter they even quote at length the lyrics of a rock song that was inspired by the featured galactic phenomenon. This not only makes the book overly long but also dilutes its core subject, knocking the wind out of its impact. A well edited version could have made it half the length and twice as compelling.

You won't learn anything new here..

What disappointed you about Dreams of Other Worlds?

If you're an engineer looking for behind the scenes stories of the trials and tribulations of these impressive programs, or a lay person wondering how these missions go from concept to operations, look elsewhere.

There is very little content wrt the design conceptualization, development, and operations, the political battles, etc etc that the scientists and engineers both at NASA and its contractors surely go through.

The author, instead, just gives us a chronological list of unmanned exploration programs, talks briefly about their science packages, and discusses how various programs get kids from around the world involved and interested. Great [to be read with sarcasm].

In short, very little useful information, not too many good stories, etc.

The book seems like it is written to engage the imagination and enthusiasm of the general public. As such, it contains tidbits of information and anecdotes ranging from philosophy to technology. While, due to the broadness of scope, some topics were inadequately explored, other topics were presented that proved both intriguing and interesting in their own right. A few slip-ups in the writing that might have been caused by the co-authorship or not, enough to pull the 'story' down from a 5 to a 4 as more stringent editing should have eliminated these small blemishes.

This is a broad overview, and serves quite well in that respect. Recommended.