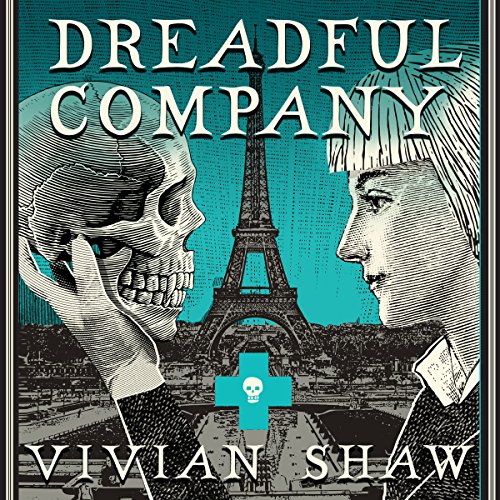 By: Vivian Shaw
Narrated by: Suzannah Hampton
Try for £0.00

When Greta Helsing, doctor to the undead, is called to Paris to present at a medical conference, she expects nothing more exciting than professional discourse on zombie reconstructive surgery.

Unfortunately for Greta, Paris happens to be infested with a coven of vampires - and not the civilised kind. If she hopes to survive, Greta must navigate the maze of ancient catacombs beneath the streets, where there is more to find than simply dead men's bones.

"This book is a joy to read, unlocking every bit of delicious promise in the premise." (B&N Sci-Fi & Fantasy Blog on Strange Practice)

"Balances an agile mystery with a pitch-perfect, droll narrative and a cast of loveable misfit characters." (Shelf Awareness)

What listeners say about Dreadful Company

I really enjoyed this, very appealing characters & an interesting story. Delivery is good but not great. Susannah Hampton’s voice is lovely but she doesn’t clearly differentiate between characters, which means dialogue can be hard to follow. I prefer narrators who can shade accents or pitch so the listener can identify the character.

Another charming adventure for Dr Helsing and co.

Dreadful Company is the delightful sequel to Strange Practice, the first book in the Greta Helsing series by Vivian Shaw. Greta is a fairly ordinary doctor, but her patients are far more unusual. Treating London's most magical and monstrous creatures is an everyday affair for Greta, but this book sees her head to Paris, where she discovers that trouble will indeed find her anywhere. Accompanied by old friends and new foes, Dreadful Company is a superb addition to a series that I hope will have a long run ahead of it. Battling the Parisian darkness alongside Dr Helsing are the trio of her trustiest companions from the previous book; the dapper, fabulous, vampire Lord Ruthven, introverted vampyre-with-a-y Sir Francis Varney, and loyal, dependable demon Fastitocalon - fresh from a spa break in Hell.

I thoroughly enjoyed this book, though as it had been a year since I listened to the previous one I do wish I had gone back to refresh my memory. Although the evebta of this book are mainly stand-alone, I wouldn't recommend anyone start with this book without first listening to Strange Practice, as a great deal of the character development and grounding of the relationships occurs in the introduction to the series.

There were several moments in the book that made me laugh, but a memorable one was when Greta first encounters the little monsters someone is releasing around Paris, and Ruthven exclaims, "If this keeps up you're going to be the most absurd Disney princess, ever."

I also chuckled at the plight of a very young, very new vampire who smothered herself in body glitter because she believed that vampires were supposed to sparkle and thought she just wasn't any good at it. Not an overt jab at the sparkly vampires of another popular fantasy series, but one which very much hit its mark.

Another thing that I really enjoyed about this book was the benevolence with which it treats the outcasts, and even the villains. Even ugliest creatures - inside and out - can find some redemption if they seek it. This is particularly charming in Varney. Vampires (and vampyres) are so often painted as arrogant seducers, and even Ruthfen has the more stereotypical charm and elegance normally associated with 'sanguivores'. Varney is different, and the awkwardness and doubt he experiences as he tries to make sense of his growing feelings for Greta have a charming tenderness and humanity to them.

Suzannah Hampton's voice is pleasant and easy to listen to, but she's sometimes a little hesitant in her delivery, pausing inappropriately in a sentence which takes a while to get used to. I do enjoy the formal language with which this series is written, as it lends the book an almost timeless quality which suits the eternals and immortals who populate its world. The series has a strong voice, and despite being set in contemporary time, could almost be set in the Victorian era just as easily as our own.

If you like action-packed fantasy then this may not be the book for you, as it is much more a book about this disparate group of characters than it is about saving the world, which they just happen to do along the way in between cups of tea and pain-au-chocolat. Overall, the message of this book - as in the last - is about the importance of friendship, of justice, and of redemption.

Just wanted to say this series is well worth a go. Had it sitting in my library for months... WHAT A WASTE! The world is Facinating & varied & I just don't want to leave the good Dr Behind! GIVE IT A TRY!

I have seen people dislike the narrator but there is something that fits both the world and the good Dr's character. Like I said it's well worth your credit & even maybe worth full price... I hope you enjoy!

I enjoyed the whole book, the characters, the twist and I look forward to the next one

A great addition to this series!

A warm and quirky tale with just the write amount of peril and a great plot. So glad they’ve stick with the same narrator as she conveys the emotions wonderfully. I also love the way women are written about as whole people and not men’s sidekicks. Really really enjoying this series and I hope there’s more to come!

Narration was very good, story was good. Enjoyed this very much. Will definitely look the rest of the series up.

I really liked the first book in the series. This one did not disappoint. The storyline was very good. The further character development of main players helped add to me being hooked! I am definitely looking forward to the next in the series.

I just love this series and its getting better and better. The concept of a GP for legendary monsters is just great and once you accept that idea the rest just flows.
The narration is exceptional, it just fits the story perfectly and Susannah Hampton is very good at giving a believable three dimensional character life and expression. I can't wait to get the next book.

I loved the first book in the series so when I spotted this I bought it on the spot. The only fault I have with it is that the narrator has started pronouncing one character's name differently from how she did in the first book, but really that isn't a major issue!

Different in tone from the first book but just as good. Really pleased to have found this author and the narrator is excellent.

A different take on the old story!

There are so many books about vampires and other supernatural beeings. This series brings something new to the table; nice monsters!