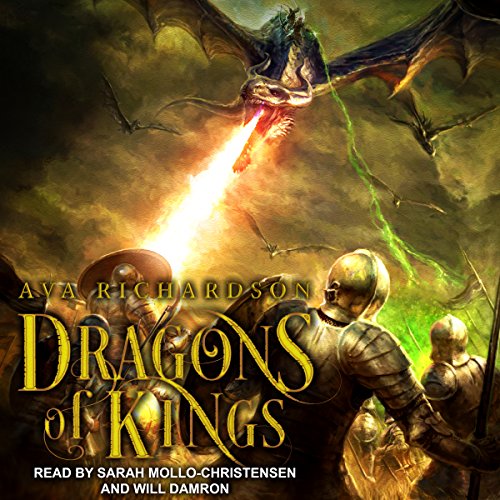 By: Ava Richardson
Narrated by: Will Damron,Sarah Mollo-Christensen
Try for £0.00

The battle for Torvald begins.

As the young heir of a noble house fallen into decay, Bower has reluctantly shouldered the mantle he was born with - that of Torvald's rightful king. It is his destiny to throw off the shackles of King Enric and lead his people to freedom, or so he's been told.

With the help of the wild and untamed Dragon Rider Saffron, he hopes to unite his downtrodden people. It will take an uneasy alliance with a rogue band of Dragon Riders and their charismatic leader, Ryland, to challenge the Dark Mage king, but distrust threatens to tear apart the force that he's risked everything to build.

Now, on the eve of battle, Bower will have to fulfill a mystical prophecy and become the leader he was born to be or risk his future kingdom falling apart. Surrounded on all sides by deadly foes, he must face not only the evil king but his deep doubts about himself.

What listeners say about Dragons of Kings

Absolutely loved it , it was captivating with a twist of fate at the end

A real coming of age story

A great story, good speed and cleverly structured, I miss Tiffany as narrator though but well done

Enjoying the series in total. Individual reading would be fine; one just gets the complete picture with the series.

love it. she. is a great author. and I love the two readers. thank you.

Young Bower living with Saffron and a den of dragons is destined to be king, and Saffron just doesn’t see it. She trains him to fight because she knows the terrible enemy Bower must someday face, but despairs of his ever being ready.

No one does coming of age stories better than Ava Richardson, and she does hers with dragons! This is more than a boy becoming a man, he is becoming a king and a leader of men and dragons!

Evil Enrick has turned Torvald against dragons and has turned his magic on Saffron. Bower and Saffron will need all the help they can get to fight the evil of Enrick and the Iron Guard.

You can read this as a stand-alone, but you can’t go wrong with any of Ava Richardson’s dragon trilogies.

The audible performance on her books are usually good. This one was good enough to distinguish the characters most of the time, although I did get confused a time or two.

breathtaking and such an Adventure.

could barely stop listening to The Saga unfold. cannot wait to listen to the adventure in the next installment