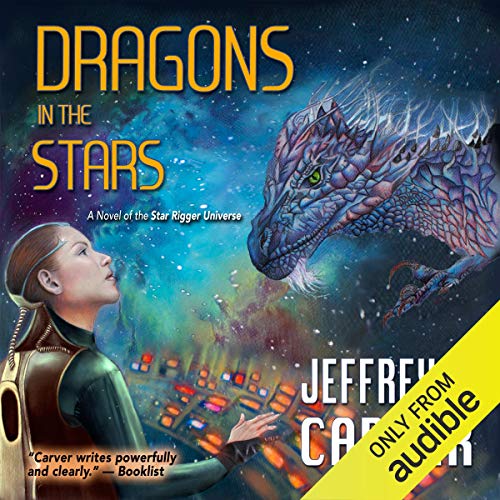 Dragons in the Stars

By: Jeffrey A. Carver
Narrated by: Mirron Willis

Dragons in space? A preposterous legend. But when star pilot Jael defies an abusive ship's master and rigs "the mountain route" through the hyperdimensional Flux, the dragons indeed appear—and challenge her to duel. If she escapes, will she ever dare this route again? Fate has its ways, and when next the currents of space bring her near, she finds Highwing the dragon under sentence of death for the kindness he showed her. Only Jael can intervene—and so she must, for the sake of the one who risked his life to save hers.

A genre-bending novel of the Star Rigger Universe, from the Nebula-nominated author of Eternity’s End and The Chaos Chronicles.

"Carver writes powerfully and clearly and has produced a book that is likely to find an audience among hard SF readers." (Booklist)
"An interesting and entertaining blend of genres." (Science Fiction Chronicle)
"Carver's prose effectively lends a spare yet evocative resonance to the draconian realm. Like a good stage performer, this story should leave its audience wanting more." (John Bunnell, Amazing Stories)

What listeners say about Dragons in the Stars