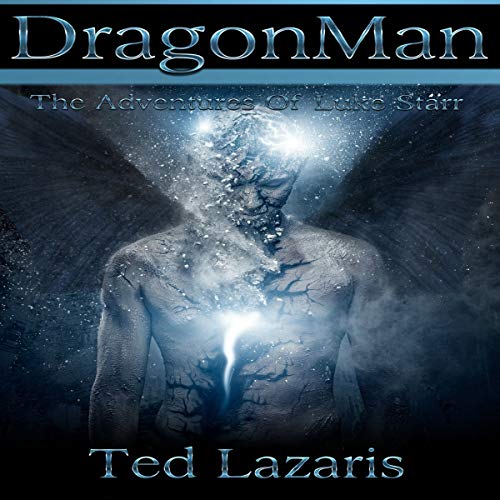 DragonMan - The Adventures of Luke Starr

Ted Lazaris is an American, Amazon best-selling author, with seven best sellers to his name, so far.

Answer: In some way, shape or form their magical characters find a presence in Ted Lazaris's Dragonman, The Adventures of Luke Starr.

The similarities are irreverent and fun; Dorothy's adventures in Oz (in Baum's outstanding series of books, not the 1939 MGM movie) are no more strange and fantastical than young Luke Starr's trek through the mythical world of Spellville in search of his kidnapped friends. J.R.R. Tolkien's evil orcs and wizards are equally well represented by Lazaris's hag demons and gruelbores, and Luke falls afoul of as many odd creatures in Spellville as Harry Potter does at Hogwarts.

But the journey for Luke is not so much a mission of mercy as one of self-discovery. For despite his humble Midwest origins, Luke is no ordinary teenager. Imbued with super powers following a ritualistic exchange of blood with a dragon, Luke soon discovers the awesome legacy of his birthright and must learn to accept the fact that he is known in this other world as the Chosen One. Still, in the tradition of Marvel Comics' Stan Lee, creator of modern superheroes like Spider-Man and Silver Surfer, Lazaris's Dragonman is unquestionably human, grappling with his doubts and fears even as he sets off to save Earth from alien beings hell-bent on destruction.

"My book is about good fun and a means of escaping your daily routine," Lazaris tells his fans, and keeps his promise by delivering a fast-paced fantasy in which the epic struggle between good and evil rests squarely on a likeable hero's young shoulders.

(Recommended for pre-teens all the up to adults who want to forget about work tomorrow and lose themselves in a great story.)

What listeners say about DragonMan - The Adventures of Luke Starr

You get so drawn in by the narrator, you can't wait for the next adventure.
truly remarkable writing and narration

This felt more like a story one would find in a literary textbook in high school. Also the performance was very good, but also reminded me of a school play. It also had an Alice in Wonderland, type theme, but with a guy instead. Still good book. Fun story.

The author clearly has a lot of ideas and is not shy about putting them to the page. Most of the classical elements of fantasy universes are found here, along with some innovations.

The story is large - spanning both nations and universes. Unfortunately, this is where the author's inexperience becomes most visible. Major plot points are laid out in plan text as the characters quickly identify and implement solutions. I would have preferred more storytelling around these situations as the book currently reads more like a speedrun of a game than properly experiencing the world.

In some way, shape or form their magical characters find a presence in Ted Lazaris's Dragonman, The Adventures of Luke Starr. well written audiobook good narrater too

It's a good first book in the series. I will follow this series and I think it will keep on getting interesting.

Loveable characters and an amazing narrator. This book takes you through a great adventure but sometimes the pacing can be slow. The book takes elements of other books and meshes them together in one. On to the next in the series.

Let me start by saying there is a good book (or three) in here.
I really wanted to like this book. It has a great concept and lots of content. Sadly, it has too much content. The book his numerous interesting story ideas and plot devices, but the author doesn't hold onto them. It seems like one page is spend building a part of the story, and the next page is giving you the resolution for the event. Numerous times, I found myself rewinding because I missed the quick resolution given and was already onto another part of the story. I think Ted had too many Ideas for the story that he couldn't give enough time to almost any part of the story.

If you read Ted's bio you may come to understand some of the difficulties he must have had on the journey to write this book. I think there truly is something great in here, but some meat has to be added to these bones.

The narration wasn't the worst for this one, but if you look ahead at the next books in the series, you can see that narrators tend to change from book to book. I'm sure it is tough to find the right narrator for your first book, but this one might be better off being read than listened to.

I struggled just a little with this book. I think it would have been better if spit into parts. This feels like three or 4 different ideas/books mashed together. It has a lot if religious undertones mostly catholic. I believe the author uses this as the great fight between good and evil, but religious stuff just isn't for me. I think this book is a serviceable introduction of a main character I am interested in. This book has enough good ideas I will be continuing to book two in the series.