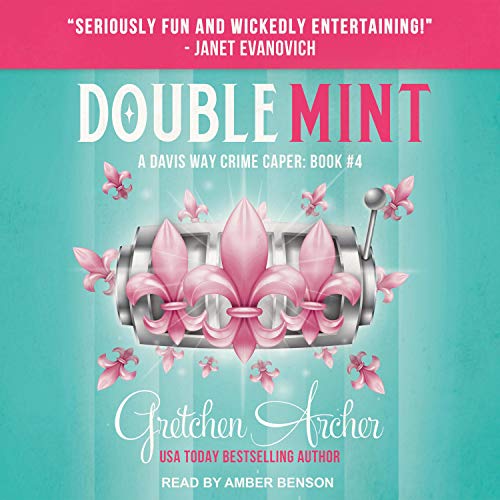 It's convention season at the Bellissimo Resort and Casino, and Davis Way Cole barely notices. It's hard to pay attention when you live in a Jambalaya Junkyard. But when special events coordinator Holder Darby walks off the job just as 500 Alabama bankers pour in the front door, Davis steps up - or would that be in? Definitely in. Davis steps in it.

Not only has the convention director vanished, but a certain Bellissimo guest is missing - one who forgot to pack the million dollars he left in the bathtub. It looks like our redhead newlywed supersecret spy's lazy summer is over when the Bellissimo vault is robbed. Can Davis connect the dots before it's too late? Can she get her Taser gun back from Bianca Sanders? Will she be stuck with Eddie Crawford's 1962 Cadillac forever? What Davis needs is a little faith - and a lot of luck.

What listeners say about Double Mint

Double Mint is the best of the best!

What did you love best about Double Mint?

This is just a great series! Double Mint is the best of all the stories so far. I am only halfway through this book but I am so entertained that I had to write a review. Amber Benson does a phenomenal job capturing Davis Way. Her dead pan voice perfectly delivers the sound effects that Davis sometimes says, "Plop, plop, plop". So funny!
And Davis' relationship with Cat is hilarious.

What was one of the most memorable moments of Double Mint?

Cat. I love the interaction between Davis and Cat.

Which character – as performed by Amber Benson – was your favorite?

The friendship between Davis and Fantasy is just terrific.

I just love this author and narrator. I cannot wait for the next audible book in this series!

Loved it!!! Thanks Gretchen - keep writing and fast!

loved this book! I laughed out load. Can't wait to download the next book in this series.

So funny.
I laughed at each new name for the suite they lived in.
An enjoyable series with hilarious characters. It's Stephanie Plum meets Charlie Davidson meets Island Chaptal.

The characters in this series are so interesting. The author mixes humor and mystery in a perfectly timed delivery. Davis Way exhibits a fully dimensional heroine. Her humorous comments allow the listener to enjoy the events. The narrator perfectly distinguished the voices of each character. I did not listen to the books in order, but nothing was lost. My only regret that at this time remains that I do not have another Davis Way adventure to enjoy.

the narrator destroys the book, in my opinion, her voices are to similar, & i hate her delivery.

The first couple of books in the series were OK. This one started off silly and just ended up absurd, but not in a good way.

Not a Bad Story, Horrible Narration

The story is fine, but the narration is terrible. The narrator sounds about 30 years older than the main character. All the secondary characters are read like they are idiots. A good narrator can differentiate between the different characters without using ridiculous accents, this narrator cannot.

Love the inside look at casinos, how smart Davis is figuring out bad guy plots, and the interplay with Bianca. Can't wait to see the next one.