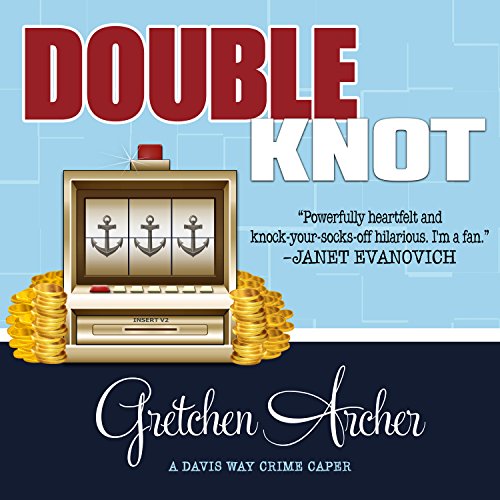 Superspy Davis Way sets sail on a Caribbean cruise aboard the MS Probability with 50 billionaires, a boatload of Louis Vuitton luggage, Anderson Cooper, and her mother. (Her mother?) The weather is perfect, the seas are calm, and suite 704 is spectacular. Until the door slams shut. For good.

Obviously it's a system glitch. Surely someone will show up to free Davis, Miss Hawaii, and the creepy staff. But when the minutes turn to hours and the hours stretch into a day, Davis knows it's up to her. With $50,000 in casino chips, a pot roast, and a crash course in banking, she races against the clock to determine why they're being held, stop the people behind it, and find a way out.

Secrets are revealed, antiquities are destroyed, and they're running out of dishes. It's mayday on Probability when Davis Way realizes that only the truth will set her free.

What listeners say about Double Knot

Gretchen hits the jackpot with another great mystery!

Another exciting mystery laced with humour in Gretchen's own unique style. Her eye for detail continues to impress and helped me to lose myself in the story. In Amber Benson she has the perfect narrator she let lose some of her lovely southern accent to bring the cast of characters to life. Her background as an actor means she is able to use her training to give each character their own voice. Something that in my experience not many narrators are able to do. With Amber you always which character is speaking and in a busy scene that really helps. There are elements of the locked room mystery here which for vast majority of book work well as the plot very well thought out. However for a couple of chapters I did feel the pace slow down and drag a little but it soon picked up again. I also didn't understand how a lack of dish soap lead to extreme measures but those two small niggles aside It was very enjoyable and I recommend this book and the series to anyone who loves a good mystery. I hope there will be another Davis Way mystery with the Gretchen/Benson partnership too.

A laugh a minute as always

Gretchen Archer has done it again, delivering a laugh a minute as always! Double Knot is the fifth book in the series and I highly recommend starting with the first book, Double Whammy. Amber Benson does a wonderful job of bringing the characters to life and distinguishing nicely between them. Hold on to your sides and get ready for a wild ride.

There are not many books that will make you laugh out loud but this is one of them.

Another amusing story on the Davis Way series. This one had some great twists and turns, and I enjoyed getting to know Davis's mother more. She added a funny element to the story.

can't wait for the next one!

loved this book and I can't wait for the next one. Davis Way is a hoot. way better than Stephanie Plum.

Gretchen Archer has done it again!

Absolutely love every book in this series! Can't wait til the next one is out.

Laughed So Hard I Peed My Pants!

Laughed so hard I peed my pants. Really!

I've been craving a new series so last week during the half price sale I purchased a couple of first of a series Mysteries, I ran across Double Whammy and was instantly hooked I immediately bought all 5 in the series. Last night while listening to the L and D portion in Double Knot (last of series to date) I laughed so hard, I peed my pants while rushing to the bathroom. I' m absolutely not kidding.


Who should buy this series... Anyone who loves Janet Evanovich and J. D. Robb. Loves rich unique characters (Bianca is one for the books.. don't worry she will grow on you, kind of like mold) The plotlines are equally unique and well crafted. Dina Perlman is a genius, with superlative, spot on, comic timing, jump off the page character portrayal and my new favorite... think Susan Ericksen, Amanda Ronconi and Lorelei King. Teasers...The series includes Body Double, Egocentric Celebrity Airhead, Casino gambling with its glamour as well as its dark underbelly, murder, intrigue, mystery, just a touch of romance and pee your pants moments...The Davis Way Series is a hard act to follow and I'm having such difficulty finding another series that hooks me, I've decided on a re-listen of the entire series and I'm having just as much fun the second go around. IF... any of these points interest you...BUY THIS SERIES, YOU WON"T BE SORRY! Warning: stay close to a bathroom!

I like this series a lot but personally tend to react to any book, movie or story about being trapped. For me too much of the story felt like they were locked in a room or remembering about the past while locked in a room.

I love this series but please redo it with a new narrator. She sounds so bored!