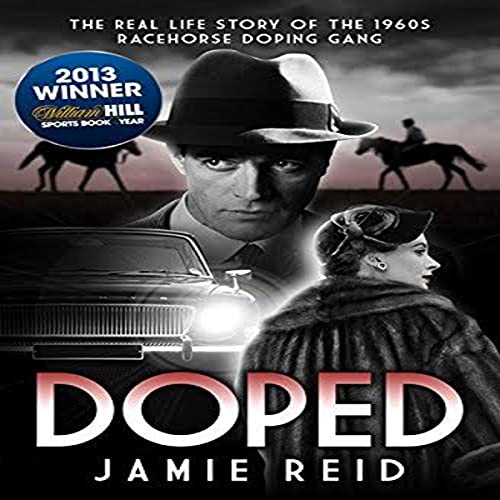 Doped is the gripping, true racing thriller set in Britain in the 1950s and early 1960s. Combining a potent mix of horse racing, drugs, sex, class, crime, gambling, and the monarchy, it tells the true story of one of the biggest doping scandals in British racing history.

In March 1962 an audacious attempt to nobble one of the royal horses alerted police to a well-organized band of racecourse criminals, backed by murderous London gangsters. The subsequent Flying Squad pursuit of the gang brought the quaintly deferential world of racing into sharp conflict with the harsher realities of the "You've Never Had It So Good" era. This also coincided with the birth of the annual Dick Francis novel.

The cast of characters is headed by William Roper, a debonair ex RAF sergeant turned oddsmaker. His team included an ex jockey, numerous underpaid stable lads, an upper-class gambling addict, and a violent professional gangster who went on to face charges with the Kray twins in 1969. But the most fascinating member of Roper's firm was a beautiful and self-possessed young Swiss woman called Micheline Lugeon who became the bookmaker's lover.

What listeners say about Doped

The worst narration ever

Book completely spoiled by narrator. A story of 1960's Uk horse racing, read by an American female who has no idea of the pronunciation of the Towns/ Titles/ Names involved in the story. She also reads the book like a 14 year old schoolgirl standing up in class to get to the end of the page as quickly as possible, with absolutely no attempt at acting or interpretation of the events described. Unfortunately, just terrible. A good reader can make a book. A bad one certainly destroys it. One star for performance is quite generous.