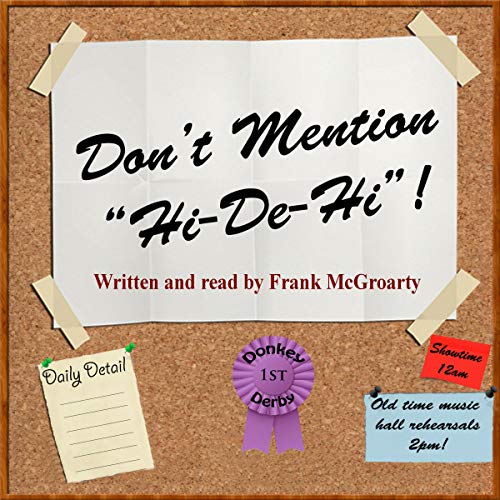 The 1982 summer season at Butlins Ayr was over. For Terry McFadden, life couldn't be any better. Those few months did not just change him as a person - they also changed his life.

He had just finished working in his dream job as a Butlins Redcoat, where he closed the door on his childhood life, received a major boost to his confidence, and found the love of his life, kitchen assistant Angie Bierman.

Now they were back in the “real world”, living on either side of the country. How would their relationship survive during the off season?

A return to Butlins was not guaranteed. But if the invitation came, would they want to go back for the 1983 season? Would Angie get to fulfill her own dream and join him as a Redcoat?

Blending romantic fiction with historical fact, Don’t Mention "Hi-De-Hi”! is the second instalment of the Butlins Ayr Trilogy and the follow-up to What Time Does Midnight Cabaret Start, written by former Redcoat Frank McGroarty, set in a much loved and missed holiday camp during the early 1980s, regarded by many as the latter years of the “Hi De Hi “era.

Really enjoyed listening to this Book. Needs to be more Audio Books done on Butlins and Holiday Camps. Also would like a sequel doing to this book to find out what happened to the Happy couple next.

Nice throwback to 80's butlins nostalgia, I struggled with narrator seemed abit amateurish. would not have continued listening , if it wasn't for my love all things Butlins related.