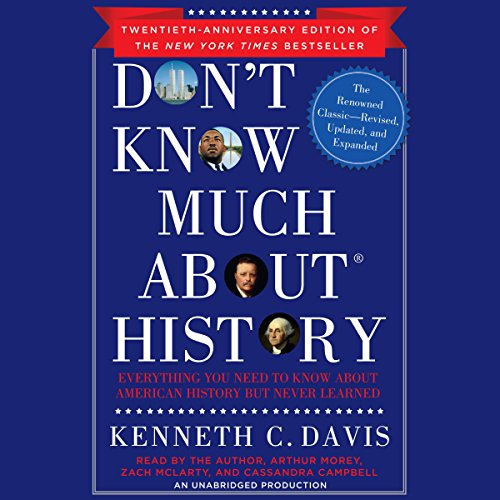 Here, celebrating the 20th anniversary of its debut as a New York Times best seller, is the revised, updated, and expanded edition of the classic anti-textbook that changed the way we look at history. First published two decades ago, when the “closing of the American mind” was in the headlines, Don’t Know Much About® History proved Americans don’t hate history—just the dull version that was dished out in school.

Now Davis has brought his groundbreaking work up to the present, including the history of an “Era of Broken Trust”, from the end of the Clinton administration through the recent Great Recession. This additional material covers the horrific events of 9/11 and the rise of conspiracy theorists, the wars in Iraq and Afghanistan, Hurricane Katrina, and the failure of the New Orleans levees, the global financial meltdown, the election of Barack Obama, and the national controversy of same-sex marriage.

Not convinced on its accuracy

What would have made Don't Know Much About History, Anniversary Edition better?

The author calls Great Britain, England. Therefore it is very confusing. If the author doesn't know the correct name and terms of GB then it throws doubt on other facts. Really put me off that ignorance and lazy research has been used.

What could Kenneth C. Davis have done to make this a more enjoyable book for you?

Would you listen to Don't Know Much About History, Anniversary Edition again? Why?

I have listened to this book a couple of times. I originally purchased this book as a refresher on American history because my children were asking questions that I know I knew at one point but needed a quick refresher. Now I find myself skipping to the part of the book I am looking for more on.

The format of the book is a little odd and takes some getting used to. Once you get used to some of the book formatting that doesn't fit well in an audio book it is just fine. The other disappointment is that most of the United States Civil War has been removed and moved to it's own book. This was a pretty significant bit of history that gets glanced over.

amazing history book. it helps to understand how the US developed. it explains major events in an exciting style that was very enjoyable. loved it. had a great time listening.

One of the best history books I've read!

This book does a great job on getting you up to speed on the key points of American history, and it does so in an interesting and sometimes humorous way.
Highly recommend. One of the best history books I've read.

What disappointed you about Don't Know Much About History, Anniversary Edition?

I was hoping for an objective overview. This was not it. (Note: I am by no means a staunch conservative--more of a middle-of-the-roader--but still thought the treatment of so many periods of history were inexcusably laden with liberal biased. E.g. the vilification of corporations and free enterprise and the utter glorification of unions.)

Although I applaud the ambition of the author in covering such a dense span of time, his frequent inability to portray events by facts, detached from agenda, was disappointing. Also, the fact that he chose to do it in a question/answer format, rather than in purely chronological order, made it confusing at times and difficult for the listener to put events in chronological context. (Though the chapters are in chronological order, the questions within them may hop between presidencies and may go forward and back in time 10 years or more from one to the next.)

Would you recommend Don't Know Much About History, Anniversary Edition to your friends? Why or why not?

I thought his manner of reading, especially in his tone and diction, sounded condescending and cynical.

The reading of all of the questions at the beginning of the chapter was tedious and unnecessary. It's like reading a textbooks table of contents before each chapter. Totally obnoxious.

what you miss in school

Would you listen to Don't Know Much About History, Anniversary Edition again? Why?

nothing in depth, everything anyone who isn't living under a rock would know. probably good for a young teen.

Learned a lot about the history and workings of the U.S.A. government. Am surprised to see how we repeat the same errors. However, it seems that for each crisis there was a man (or men) who rose to the occasion.

I learned so much more about United States history than I read in college history books. Definitely an eye opener to some of the history taught in middle/ high school.

Interesting to hear more details of our history. Changes perspective on a number of topics!

The true history of America.

Loved it! True history, without the built-in propaganda. This is what our kids should be learning in school. Great work by the author.