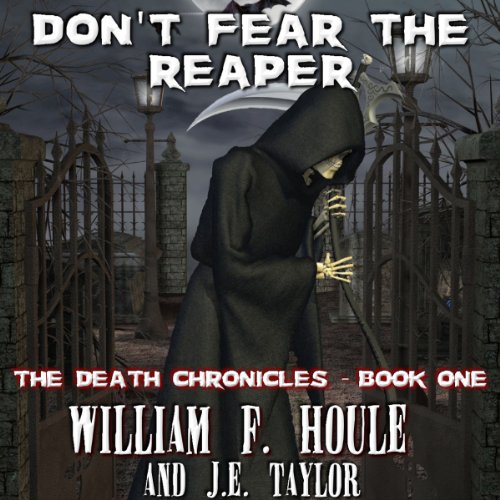 The day Nick Ramsay's eighth-grade teacher drops dead in his classroom, Nick sees his first reaper. When another cloaked figure appears at his grandmother's bedside, Nick issues an order for the vile creature to leave her alone.

This simple act of defiance creates a domino effect that brings Fate and Death to Nick's door and reveals his true lineage, throwing his world into chaos. To make matters worse, a group of rogue reapers declares war on humanity and Nick is the only one who can stop them.

I didn't get through the book, as I just couldn't deal with the narration. Too fast and excitable for me.

Read the book - the audio version is horrible!

Would you try another book from William F. Houle and J. E. Taylor and/or Arron Harrison?

I can't really give an opinion on the story because the audio version was so poorly done. It seemed as if the narrator was in a speed contest. The book must have been written without punctuation because he rarely slowed down. His female voices were just loud and screechy. I have been a long time audio book listener, and I have never had to stop an audio version due to a narrator. This is a fairly short book, but it was too obnoxious to stand. I'll buy the book and read it. This was a complete disappointment.

What was most disappointing about William F. Houle and J. E. Taylor ’s story?

Once again, the premise of the story was intriguing, but I could not get beyond the poor narration.

Would you be willing to try another one of Arron Harrison’s performances?

I just can't listen to this...

The Book might be good but the production makes it sound like a mediocre podcast. And the narrator reminds me of an over-enthusiastic high school drama student.