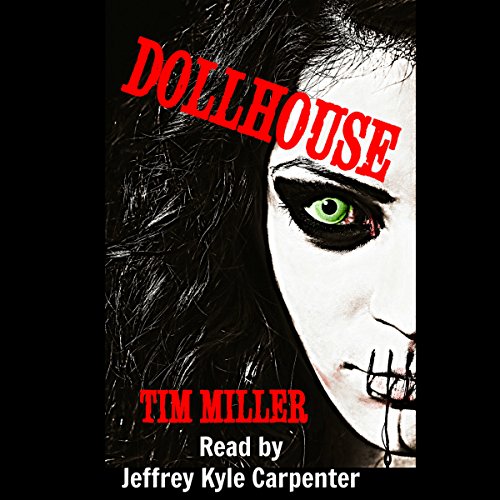 By: Tim Miller
Narrated by: Jeffrey Kyle Carpenter
Try for £0.00

Ernie Lester is a grown man who likes to play with dolls. Except his dolls are not actually dolls. They are living, breathing women. Using drugs to paralyze them, he brings new girls into his "Family", where he bathes, feeds, and uses them to decorate his Dollhouse. When Ernie sets his sights on Jodi, he realizes he must have her at all costs. Everything about her would be perfect for his Dollhouse. Problem is, Jodi comes with a heavy price.

Will she end up as one of Ernie's dolls? Or will Ernie finally push things too far? Find out in one of Tim Miller's most terrifying tales to date.

What listeners say about Dollhouse

The story itself is so crazy but at the same time totally believable. The author's imagination is dark and disturbing in a good way if you're a fan of horror stories that is. I was really "creeped-out" by the manner at which Ernie (main character) had evolved into the personality he was in the story. The depiction of him and his infatuation with his "living dolls" was a cross between mental sickness and a pure stroke of genius by the author. Guys like Ernie most likely do exist in our society (which makes it totally believable) and coupled with his sadistic sexual appetite makes this story hard to swallow, but at the same time infatuating to listen to. It is nearly three hours of a wild ass roller-coaster ride of sexual fantasy turned nightmarish reality for a few unsuspecting females.

Have you listened to any of Jeffrey Kyle Carpenter’s other performances before? How does this one compare?

I have listened to some of his other audio books. This performance in my opinion, demanded more character acting than the other ones I've heard. He does a really good job capturing the character of Ernie, and just how utterly demented he is. Bob (Jodi's boss) was also done exceptionally well in the story. I find myself with a white-knuckled clenched fist after hearing some of his female-bashing comments he blurts out at times. He is certainly a twisted guy with serious narcissistic problems over-running his life. I believe that Mr. Carpenter captured the dark and gruesome story line perfectly. In addition, the perverted main characters were all too real at times. I think its his best performance to date.

If you could rename Dollhouse, what would you call it?

I believe "Dollhouse" sums up the story to perfection. It was Ernie's creation, and I'm sure he wouldn't want it any other way.

This story is not for your ears despite the harmless title. Definitely for adults only!You WILL NOT read another book like this one, I'm willing to bet the farm on that...or the dollhouse.The only advice I could give...."Ladies avoid the moonseed berry juice!!"

Awesomely twisted...I love and hate endings like this! I have fallen in love with this author!

my first read/listen to this type of book. I can't say it was bad, different maybe, but not bad. If your not open to extream torture of helpless girls and the like then this isn't the book for you. Bottom line it's fiction gory and sick fiction and that's alright with me.

I am a horror movie fan but, this book was awful to get through. No real story or characters. Just a reason for over the top pure discust.

tim Miller does it again. I don't know how he comes up with it, but he manages to keep you glued to every word .